Everyone's favorite way to get a pile of indie games at a good price has returned - Humble Bundle with Android #5 is a go. You can support developers, charity, and the Humble organization with your purchase, in the amount and proportion of your choosing. 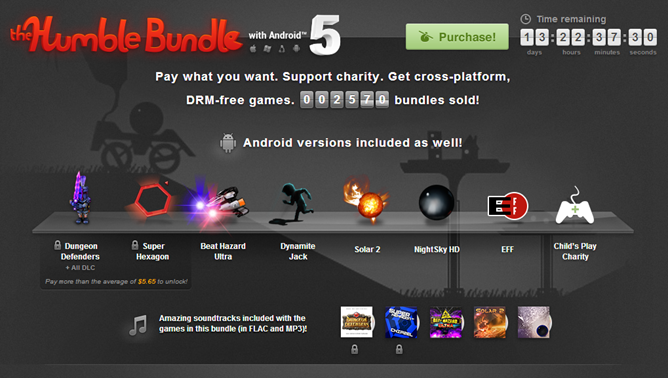 Four games are included no matter how much you give - three of them brand-spanking-new to Android. Dynamite Jack, Solar 2, and NightSky HD are all making their Android debuts with this Humble Bundle, and the retina-searing Beat Hazard Ultra is also included.

If you pay above the average donation, you'll also get Super Hexagon and Dungeon Defenders, the latter of which was retired from the Play Store last year because of hosting costs. Humble has generously offered to bring the game back from the dead to include it in this bundle, and with every piece of DLC included. The bundle, as usual, also includes some awesome indie game sound tracks. Head over to the Humble Bundle website to get it now.

Snoop Dogg Is Getting His Own Rhythm Fighting Game, 'Way Of The Dogg' - Snoop Lion Gives Seal ...