When I first read the specs and saw pictures of the MeMO Pad Smart, the only thing that popped into my mind was this is just like a TF300, minus the dock. It was beyond me why ASUS would even build a tablet that is essentially identical to one of its other tablets. Sure, the price is $50 lower, but still – is there really a market for this?

I imagine that, like me, the majority of you also judged this tablet based merely on the spec sheet. This is last year's flagship, you might have said. And of course, I understand that. Hell, I stepped into this review expecting to tell everyone why they shouldn't buy it.

Guess what, though? I was wrong. This is actually a really good tablet, save for one fairly major flaw. Still, for $300, some of the features it offers absolutely blew me away. If ASUS would've bumped a couple of the specs up a notch – namely the display and RAM – this would easily be one of the best 10" devices on the market.

Now, let's talk about why. 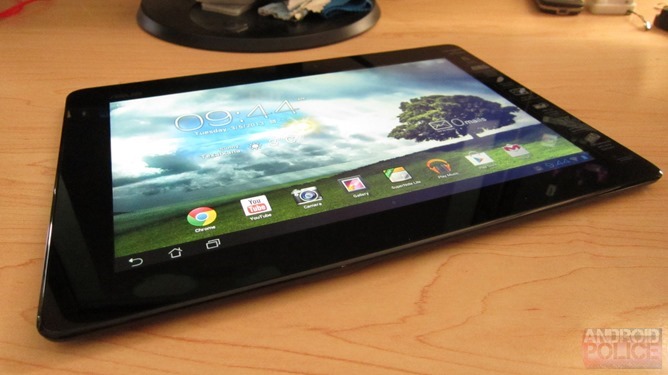 What is there to say about ASUS build quality that hasn't already been said? It's good. Very good. The MeMO Pad is no different. It may be made out of plastic, but it feels great. Unlike the TF300, which has a textured back, the MeMO Pad has a smooth back. That could be what makes it feel so much thinner than the TF300, because in reality, they share essentially the same dimensions. But it definitely adds to the feeling of sleekness. 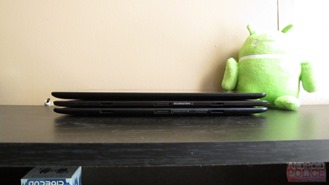 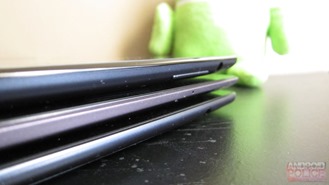 The port and button placement on the tablet is pretty familiar for anyone who's ever used a Transformer: power button on top; microHDMI, microUSB, and microSD on the left side; and volume rocker on the right side. On this one, though, you won't find a thing on the bottom since ASUS did away with the proprietary charger.

Otherwise, it's pretty cut and dry. It's a 10-inch tablet. And it's well-made. 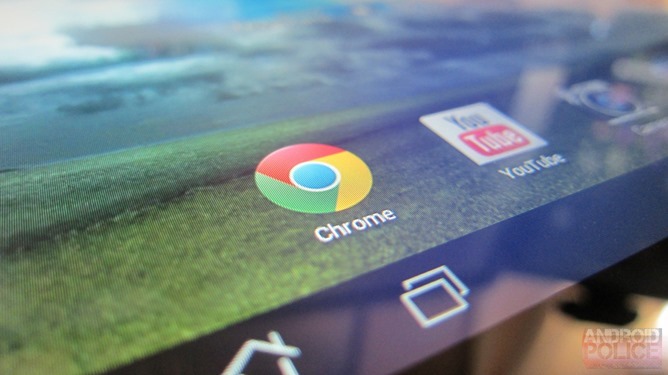 The worst and best features of this device, all lumped into the same category. Gotta take the bad with the good, after all. Let's start with the former.

Plain and simple, the display on the MeMO Pad makes me sad. Most things about this tablet are surprisingly great, but the display is such a downer that it nearly kills the entire experience. After getting used to devices like the Nexus 7 (1280x800, seven-inch display, 216 PPI), Infinity (1920x1200, 10-inch display, 224 PPI), and Nexus 10 (2560x1600, 10-inch display, 300 PPI), 1280x800 on a 10-incher (149 PPI) is gag-worthy. It's not so bad when you're not looking at text, but the second you pop up the notification tray to see your latest email, there's a cringe-inducing reminder of how lackluster the screen really is. Still, it does have impressive viewing angles. That's good for those times you want to show the guy next to you all those crappy pixels. 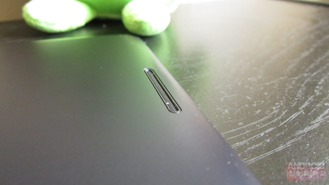 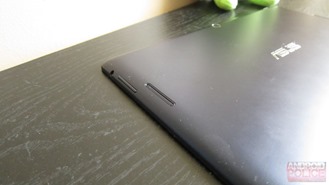 But then there are the speakers. When it comes to tablet audio, the N10 usually gets the award for best speakers, but that's mostly because they're on the front. The MeMO's speakers are on the back, but holy crap, they'll blow your mind. ASUS shipped the device with some neat software that basically tweaks the EQ with some fairly simple settings for different uses: music, movies, recording, gaming, speech, and off. There is a very discernable difference between all of the settings, and it's actually pretty clear each one was indeed tailor-made for its intended use. 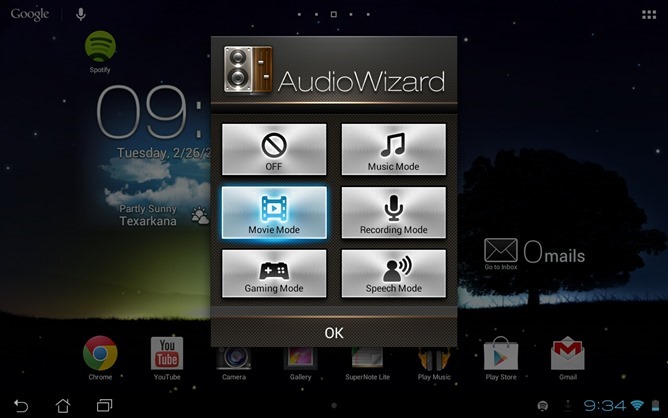 For example, the "gaming" and "movie" modes both have a fairly substantial amount of bass, which just adds to the cinematic effect of each. "Music" and "speech," on the other hand, are both a little heavier on mids and treble. Ultimately, you can use whichever settings you want, but I found the bass-heavy settings tend to cause distortion when listening to music. Hence the music setting, which has less bass.

Speaking of bass, I just want to throw it out there that it sounds like ASUS somehow crammed a tiny subwoofer capable of producing massive sound into the back of this tablet. I mean, it's not going to rattle the windows or anything, but even after a week of using the device, I'm still astounded that these sounds are coming from a tablet. 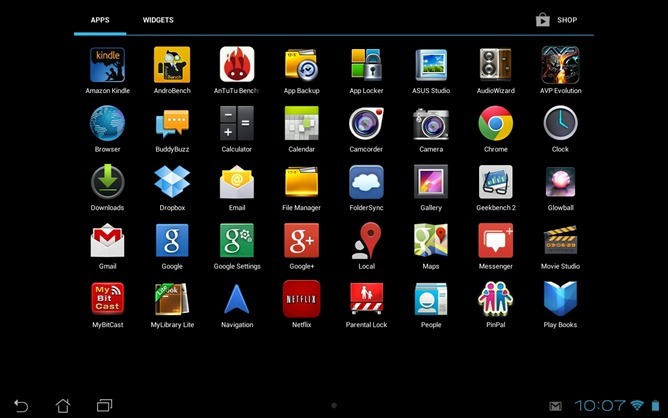 Enough about speakers, though. Let's talk about software! Basically, the MeMO differs from other 10-inch ASUS tablets in very few ways. It's running Android 4.1.1 out of the box, has a few ASUS customizations, and, honestly, that's really it.

Aside from ASUS' typical notification quick settings mod, the device sports a few other minor tweaks, like the ability to take a screenshot by long-pressing the recent apps key (the normal power+volume down method still works, too), a "screen saver" option that essentially turns the tablet into a digital picture frame, and a "system bar lock," which renders the navigation/notification bar unusable to avoid accidental taps while gaming, watching movies, and the like. All very basic, yet useful features. 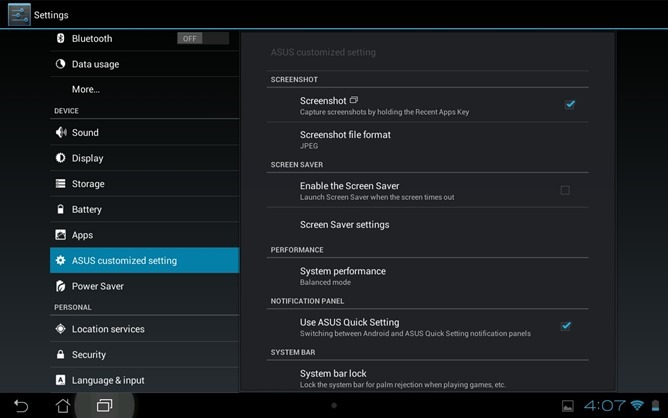 Just like on the more recent Transformer tablets, you'll also find three different performance modes: power savings, balanced, and performance. This can aid in saving battery life when you need to keep the device alive a bit longer, as well as kick it into high gear when you want to get all that Tegra 3 has to offer. For the most part, I leave all the ASUS tablets in "balanced" mode, which has always provided the juice I needed. The MeMO was no exception.

The MeMO Pad ships with various ASUS apps bundled. I'd be remiss not to highlight what these apps do, so here's a brief description of each:

That really sums up the software. ASUS doesn't tweak Android all that much, which is a good thing. What said software is capable of is the important part. With that, let's get into performance.

This is what it all boils down to, isn't it? The display, speakers, form factor, and everything else about a device can be perfect, but if it can't deliver a quality experience, then it's basically useless.

When it comes to getting down to business (or gaming, watching movies, or reading things), the MeMO doesn't seem to have much problem delivering. It handled everything I threw at it with grace, but I would expected nothing less from a Tegra 3 device. Gaming was smooth and fluid, browsing the web went off without a hitch, movie playback was good – basically anything you'd want to do with a tablet is good to go on the MeMO pad where performance is concerned.

Of course, the real issue with all ASUS tablets up to this point has been the storage read/write speed. Everything may seem to be fine, but when it comes to any write-intensive task – like installing apps, for example – the device slows to a crawl. While I haven't experienced that issue on the MeMO in the same magnitude that I have with other ASUS tablets (most Androbench scores nearly doubled that of the TF300), there was a hint of slowdown while updating apps. It's hard to say whether or not that issue will worsen with time, but it's definitely something to consider.

Since everyone loves to be able to quantify how good a device actually is, here are a few of the most common and relevant benchmarks. 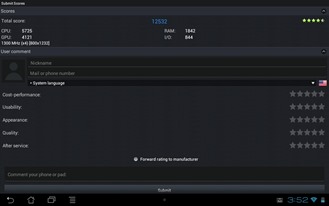 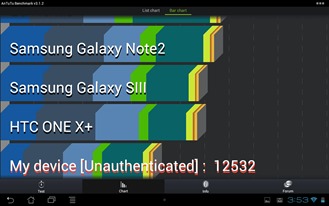 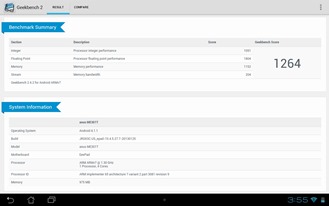 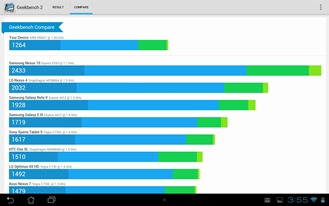 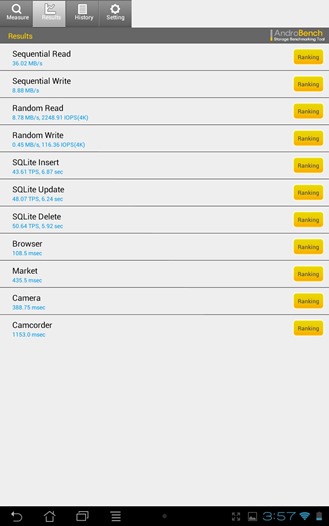 As always, benchmarks should be taken with a grain of salt, as they don't tell the entire story. Still, they're a decent way to at least get an idea of how a device performs. 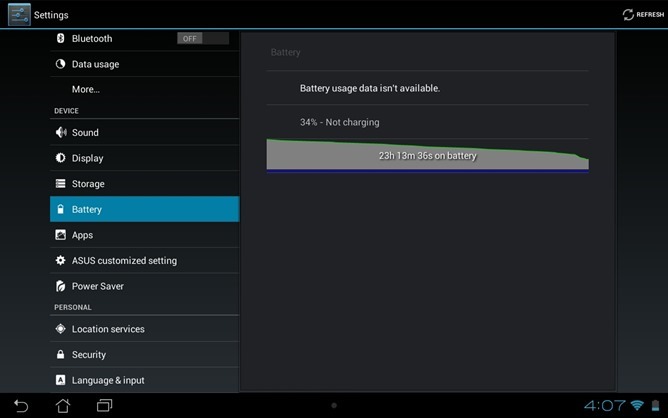 This is always the hardest part of a review for me, for one reason only: it's nearly impossible to use any sort of blanket test to quantify battery life. Sure, we could loop video and tell you how long the battery lasts, or "stream music with Wi-Fi on and brightness at 50%" until we get a low battery warning, but neither of those are real world use. Instead, I can just use the device like I would normally use a tablet, and share my results. In my opinion, that's the best way to judge battery life, but it's still far from perfect because your use may be quite different than mine. And I imagine it is. But that's what we have to work with.

With that little bit of opinion out of the way, let's talk about the actual battery life of the MeMO Smart. According to ASUS you should get "up to 8.5 hours" of use. That is, of course, under the most ideal conditions (read: not real world use). In my tests, I got roughly 7ish hours of use.

But what do my "tests" consist of? There really isn't a lot of science behind it, honestly. Here's the long and short of it:

Like I said earlier, I rarely change the mode on any of the ASUS tablets from "balanced," and that's exactly how I handled the MeMO, too. If you drop it down to "power saver," I'm sure you could squeeze and extra hour, maybe two out of it. Adversely, "performance" will kill it quicker. It's not rocket science.

If you're the type who must have something a little more concrete, I think 7 hours is a safe number to say, granted you plan on doing more than gaming 100% of the time. And that's that. 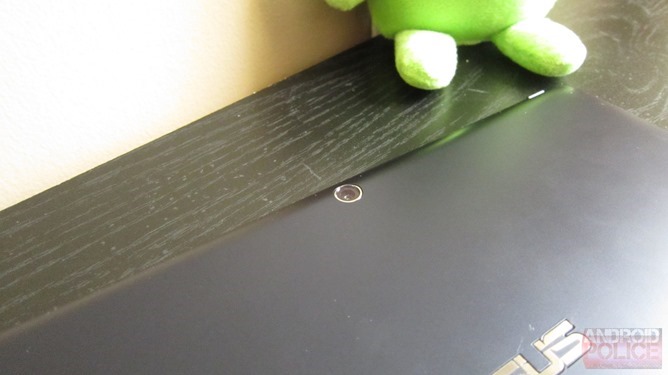 So far as tablet cameras are concerned, the one on the MeMO Pad is a winner – and that's something I don't say lightly. Mostly because tablet manufacturers generally use garbage cameras, so I wonder why they even waste their time putting them in there. If you're going to do something, do it right. Right? Right.

But back to the MeMO Pad's camera. It's lightning fast – even in less than ideal lighting conditions it snaps pictures instantly. But that's not the only thing that makes it "good;" the pictures are surprisingly decent, too. Especially when you consider that this is a budget tablet, because, let's be honest, the camera is usually one of the first things to take a hit in more affordable devices. Enough of that. Here are some sample images, because they tell the story much better than I do. 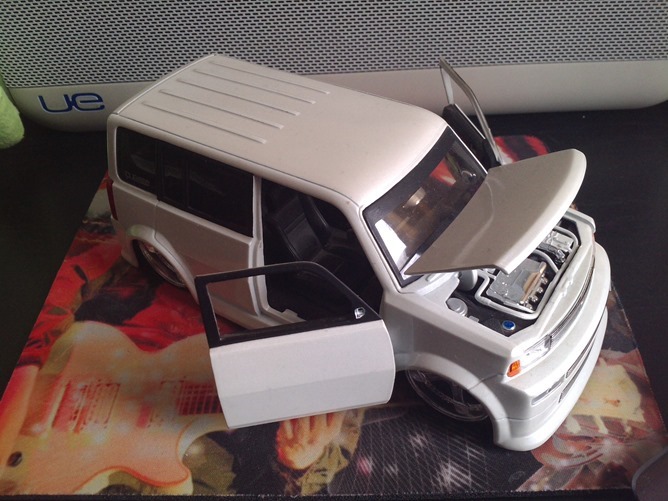 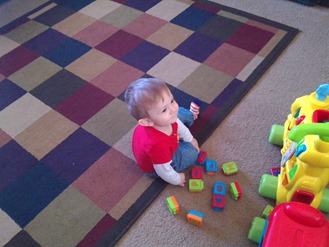 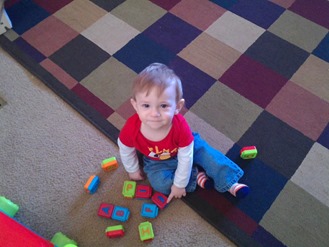 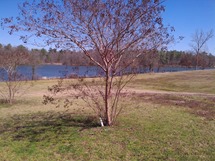 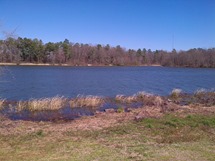 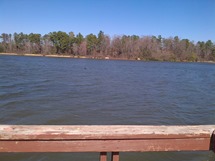 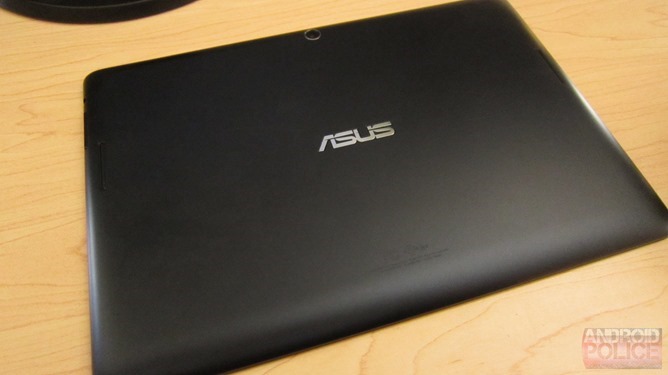 As I said at the beginning, I went in to this review expecting to be reviewing a 2012 tablet in 2013. In a way, that's exactly what I got. But the MeMO Pad Smart is much more, and is actually better than many of 2012's offerings, especially from ASUS. Sure, it doesn't have a nifty keyboard dock that nearly doubles the battery life, a hi-res display, or the latest version of Android (right now), but it does have a fantastic set of speakers, solid performance, and a likeable fit and finish. Is it the best tablet on the market? No. Far from it. But for $300, it's a good buy, so long as you can get past the 1280x800 display. That's honestly the only thing holding me back from giving the MeMO two big thumbs up. If ASUS would've taken a bit more of a hit and threw a 1920x1200 panel in here for the same price, this device would've been one of the best budget tablets money could buy.

As it stands though, it's just OK. I'm walking away form this review actually impressed with what ASUS has done, but desperately wishing the decision would've been made to include a higher resolution screen, because it pains me to see a tablet this good fall short in such a huge way.

The bottom line is this: if you absolutely cannot go over $300, the MeMO Pad Smart is a pretty good option. If you jump up to $400, though, a whole new world of options are opened up, including the powerhouse Nexus 10.

If you have any questions about the MeMO Pad Smart, feel free to fire away in the comments and I'll do my best to answer.