The manufacturer has also promised that there will be updates to its App Locker, Virtual Keyboard, Lock Screen, and Setup Wizard applications. Initially, the update will only be available via OTA for U.S. customers, but will expand to other regions throughout the month of March. 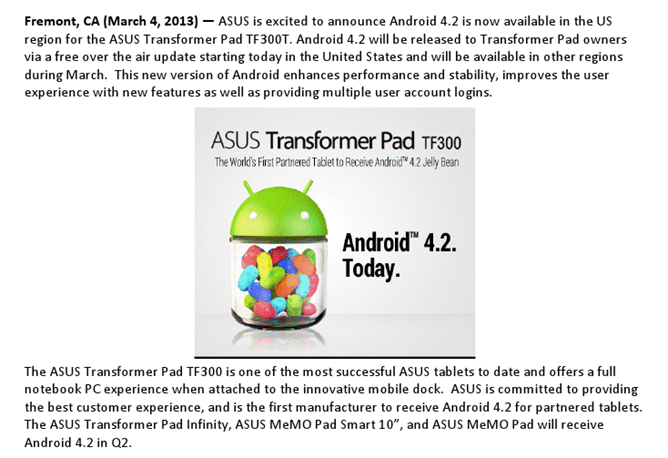 The update will bring multi-user support which is fantastic news, but also piques our curiosity. Back when 4.2 first came out, Artem noted that the lack of a permissions system on some (read: most) micro SD cards could cause some problems when it comes to multiple users on the same device. This will be our first real chance to see how ASUS decides to tackle this very significant problem.

Users of other ASUS devices, fret not for you are remembered. The company also announced that 4.2 updates will be coming for the Transformer Pad Infinity, MeMO Pad Smart and MeMO Pad some time in the second quarter.

To the best of our knowledge, this is the first Android 4.2 update for any device that isn't a Nexus. Yet, it's still coming nearly four months after the Nexus 4/10 were officially launched. If that PDK release were meant to improve the speed of upgrades, then it only seems to be having a marginal effect at best. Still, good on ASUS for being the first out of the gate. 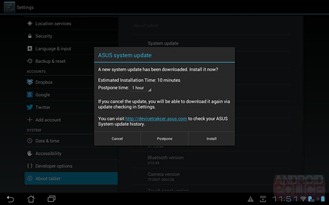 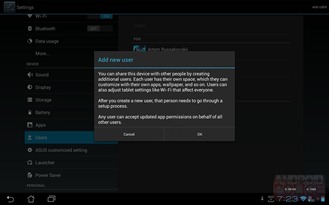 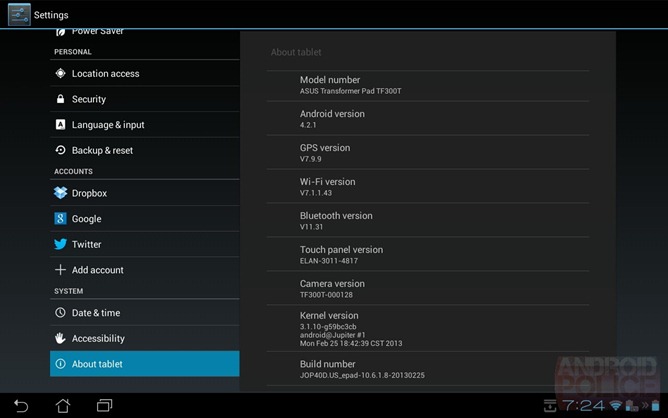 Fremont, CA (March 4, 2013) — ASUS is excited to announce Android 4.2 is now available in the US region for the ASUS Transformer Pad TF300T. Android 4.2 will be released to Transformer Pad owners via a free over the air update starting today in the United States and will be available in other regions during March. This new version of Android enhances performance and stability, improves the user experience with new features as well as providing multiple user account logins.

The ASUS Transformer Pad TF300 is one of the most successful ASUS tablets to date and offers a full notebook PC experience when attached to the innovative mobile dock. ASUS is committed to providing the best customer experience, and is the first manufacturer to receive Android 4.2 for partnered tablets. The ASUS Transformer Pad Infinity, ASUS MeMO Pad Smart 10”, and ASUS MeMO Pad will receive Android 4.2 in Q2.

Waterfield's Smart Case For The Nexus 10 Quick Review: It's Like Giving Your Tablet A ...