Verizon's LG Intuition has long been an awkward kid at the lunch table. With a 5" display at 4:3 resolution, it's had a difficult time being accepted, much less competing. Even so, it has not been completely forgotten – Verizon is preparing to roll out a maintenance update to the device that will remove the Color and V Cast apps, fix some assorted bugs, and should improve speakerphone quality. There is one curious detail to this update, it also adds the Amazon Appstore. Are Verizon and Amazon becoming closer friends?

While this update may not bring a new version of the Android OS, the international version – the Optimus Vu – is expected to receive a bump to 4.1 sometime this quarter. No announcement has been made about the VZW-specific variant, but Big Red is not known for speedy approvals and may even abandon the phone all together. Still, it is plausible that Jellybean will come eventually. 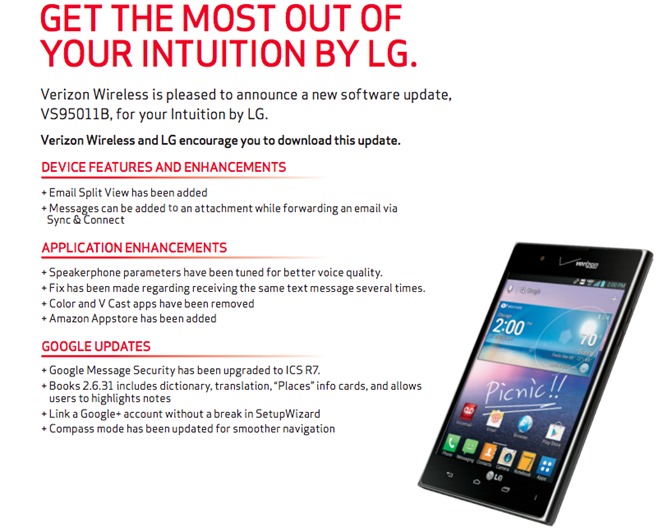 The OTA is currently listed as "coming soon" on Verizon's support site, which generally means it should begin rolling out sometimes within the next several days. The package weighs in at 204.5 MB, making a fast Wi-Fi connection recommended when the time comes.

[The Android Police Podcast] Episode 51: Get The Hell Off My Spreadsheet, Lenovo

gReader Gets A Makeover In The Latest Beta, Brings Holo To Your RSS Feed