As an addendum to the announcement of Google completing AOSP rollout for Android 4.2.2, I wanted to highlight a big milestone for the Nexus program - something that has never been the case before today.

After asking JBQ (not to be confused with JDQ39) a follow-up question, I was able to get some clarity on his earlier post and confirm that as of today, with the release of Android 4.2.2 binaries, we have for the first time ever Nexus devices that have 100% of proprietary binaries available. These devices are the Nexus 4 and the Nexus 7.

Previously, even Nexuses marked as AOSP-supported were missing at least one driver that needed to be ripped out of live devices in order to build a fully working ROM. 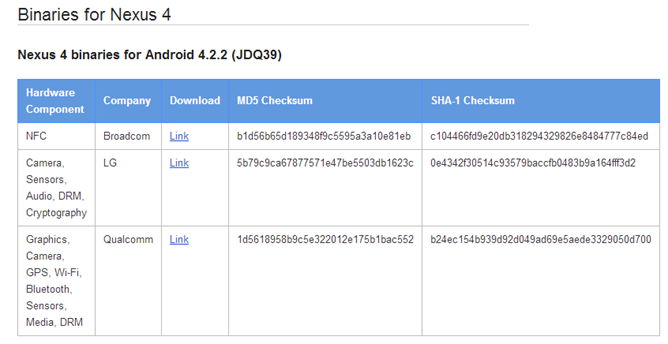 Here are some more quotes and info, for those looking for cold, hard facts.

Me, on today's announcement and the fact that the Nexus 4 binaries don't list GSM, which other Nexus devices with mobile networking do:

JBQ, I noticed the Nexus 4 GSM binaries are missing, while all other devices, including the N7 3G have it. Does that mean you can't compile Nexus 4 with telephony support?

I probably forgot to mention those binaries on the download page. It's
also possible that no proprietary binaries are needed to use telephony
on Nexus 4, in which case it wouldn't get mentioned on the list of
proprietary files. I'm not sure which of the two explanations is the
right one. Either way, telephony works.

For Nexus 4 and for Nexus 7, 100% of the proprietary binaries are
available. That had never been the case for other devices at any point
in the past. That way, you can know that 100% of the functionality on
Nexus 4 and Nexus 7 is supposed to work, without restrictions (other
than those caused by bugs).

The Building for devices page was also updated today. It lists the state of building completeness for all Nexus devices and once again confirms that the software blobs provided by Google for the Nexus 4 and Nexus 7 result in fully functional hardware:

With the current release, it is possible to build for Nexus 4, Nexus 10, Nexus 7, and for some variants of Galaxy Nexus. The exact level of functionality for each device depends on the availability of the relevant proprietary hardware-specific binaries.

For Nexus 4 and on Nexus 7, all configurations can be used, and all the hardware is functional. Due to hardware differences, do not use 4.1.1 on a Nexus 7 that was originally sold with 4.1.2 or newer.

All configurations of Nexus 10 can be used. On those devices, graphics, audio, Wi-Fi, Bluetooth, camera, NFC, GPS and orientation sensors are functional.

The variants of Galaxy Nexus that can be used are the GSM/HSPA+ configuration "maguro" (only if it was originally sold with a "yakju" or "takju" operating system) and the VZW CDMA/LTE configuration "toro". On those devices, graphics and audio are functional, as well as Wi-Fi, Bluetooth, and access to the respective cellular networks. NFC and the orientation sensors are functional.

The Sprint CDMA/LTE configuration "toroplus" of Galaxy Nexus is supported experimentally, in the master branch only. On that configuration, the cellular network is not functional, and the other peripherals work like they do on "toro".

The Motorola Xoom can be used in the Wi-Fi configuration "wingray" sold in the USA, with Android 4.1.2. Graphics and audio are functional as well as Wi-Fi and Bluetooth and the orientation sensors.

All configurations of Nexus S and Nexus S 4G can be used with Android 4.1.2. On those devices all the hardware is functional.

So, there you have it. Truly good news for Android, the Android community, and the Nexus program.

I hereby nominate today as the new official Nexus Day. Who's with me?