Well, here's a bit of a nice surprise: one lucky XDA user just got an update to 4.1.2 on his Sprint Optimus G. And then another. And another. And some more. All with nary a word from The Now Network, which is usually pretty on top of announcing updates for devices. Ergo, at this point, we're not entirely sure if this is the start of a full-on rollout or just a "soak test" of sorts. We're thinking the former, but until official word is muttered from the lips of Sprint, it's a crapshoot. 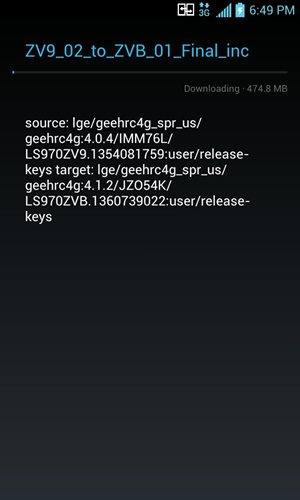 Anyone ever actually seen a screenshot like this before? It's... weird.

But enough of the logistics – let's talk about the actual update. As stated, it's Android 4.1.2, and build LS970ZVB. Of course, there's only one thing you want to know: can I have it right now? Yes. Yes you can. Well, maybe.

Earlier I said an XDA member got the update. You know what that means? He pulled said update and shared it with everyone. Of course, in order to flash it, you need to be running a locked system. If you've unlocked there are several ways to go about re-locking, most of which can be found on XDA. Past that, it should install like any other OTA – but keep in mind that you will lose root access unless you first apply OTA Root Keeper.

To grab the 474MB download (which we did verify to be legit, by the way), head over to XDA. If you're having issues, there is some good advice scattered throughout the thread. Otherwise, you can wait for Sprint to officially announce that the update is rolling out, which could very well happen within the next couple of days.

As always, we'll keep you posted as any new info arises.