Google, in a bid toward continued competition with the other social networks, today announced Google+ Sign-In, a unified login that can be utilized across the web, as well as Android and iOS apps to make sign-in and sharing much simpler. Think Facebook connect but, in Google's words, "minus the social spam."

Google, in a post to the Google+ Developers Blog, emphasized four key points of focus for Sign-In's first release, the first of which being the idea that "simplicity and security come first." Basically, the sign-in process will work like that of Facebook – choose your G+ account, review the permissions the website or app wants access to, approve, and you're set.

Next is the idea that "desktop and mobile are better together." This one is cool – it essentially means that, as Google explains it, "when you sign in to a website with Google, you can install its mobile app on your Android device with a single click."

Third, "sharing is selective; spraying is just spam." Google, with G+ Sign-In is looking to bring the platform's signature "circles" system to apps using the sign-in method, allowing users to share certain information with certain people, rather than sharing everything with everyone. Another facet of this functionality is that passive information, like what music you're listening to, won't show up on your circles' streams. It will rather appear on your own profile when accessed by those with the appropriate permissions. Things you actively share, on the other hand, will reflect in streams. 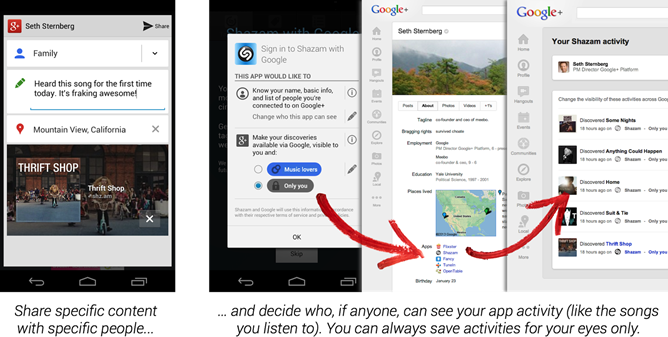 In its final point, the post explains that "sharing is for doing, not just viewing." Where other social networks just allow other users to view what you've shared, Google wants to make the experience more immersive: when you share something to your Google+ stream, those in the group with which you've shared can click a special type of post, which will transport them to the app or site to view, interact with, and maybe purchase whatever it is you've shared.

[MWC 2013] Hands-On (Video) With The ZTE Grand Memo: It's Really Big And The UI Confuses Me