More than a few Twitter power users were upset when Falcon Pro, the popular Android Twitter client, hit its 100,000 user token limit and became nigh useless for new or returning users. Developer Joaquim Vergès has resorted to an unconventional approach to get the word out about Twitter's draconian API policies: he's raised the price of the formerly $1 app to an eye-popping $132.13 (€100), ostensibly to discourage people from actually downloading it. Those who formerly purchased it can re-download it via Google Play's standard method, though logging in may be impossible.

He posted the following message in the app description by way of explanation:

Help me Extend the access token limit by signing this petition :http://www.ipetitions.com/petition/extend-falcon-pro

And Please RELEASE your access token from the Twitter settings on the web if you're not using the app anymore.

Twitter implemented the 100,000 user token limit on apps last fall (or twice as many as it had at the time, if the app already had more than 100,000), to the consternation of users and tech media alike. While the company hasn't given a satisfactory answer as to its reasoning, many assume that they're pushing users towards the web interface and official applications (which leave a lot to be desired) for advertising revenue, while discouraging third-party apps. This has been widely interpreted as a betrayal of the developers and users that helped make Twitter into the gargantuan service it is today.

While the shift in price for Falcon Pro is entertaining, it might not be the best way to go about it - at least one or two people might buy the app and get a nasty shock. (Though admittedly, there's a case to be made that they deserve it.) And based on what's happened to other apps that have passed the token limit, the petition is unlikely to sway the Twitter higher-ups.

If you want to support Vergès' efforts, you can go to Twitter.com/account/settings and remove Falcon Pro from your Apps list, to open it up for another user. You could also send him a couple of bucks via the Falcon Widget Donate version, which is still in service. 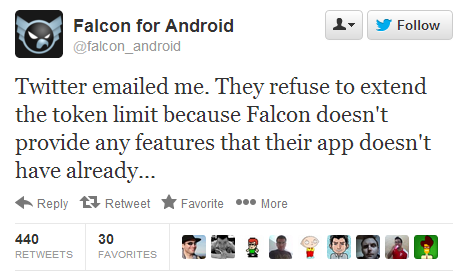 The idea that Falcon doesn't provide any extra functionality beyond the official Twitter Android app is pretty ridiculous, and only lends credence to the implication that Twitter is intentionally shutting down developers. The built-in browser alone is enough to put Twitter's app to shame, to say nothing of the excellent user interface. Thanks to commenter Eric for letting us know.