Update: Looks like ZTE may be fibbing a bit on the specs of this device, at least in what it's showing off as the "Grand Memo" at MWC...

Say hello to the newest entrant into the bigger-than-a-phone-but-not-quite-a-tablet arena: ZTE's Grand Memo. It's a massive 5.7" device with a resolution of 1280x720, Qualcomm's quad-core Snapdragon 800 processor, 2GB of RAM, 16GB built-in storage, and a 13MP camera, running Android 4.1. While a 1080p display would've been a nice addition, there's no denying that the Grand Memo is quite a powerful device.

It has a few ZTE-specific tweaks going on, as well – like a safe driving experience with car mode (creatively named, no?), ZTE’s Mifavor for a simplified user experience, and ZTE Z-Cloud... because Dropbox isn't good enough or something. You may have noticed the very obvious "back" button in the middle of the screen in the pictures. That's a thing ZTE is doing on the Grand Memo that allows the navigation buttons to be called up basically anywhere on the screen (see the third shot above), because apparently a row of nav buttons at the bottom just wasn't doing the trick. There's also a slew of 3D animations all over the place. Thankfully, everything seems to be quite fluid.

The Grand Memo is set to make itself available to the world in Q2 of this year, with "varying specifications between countries and regions." 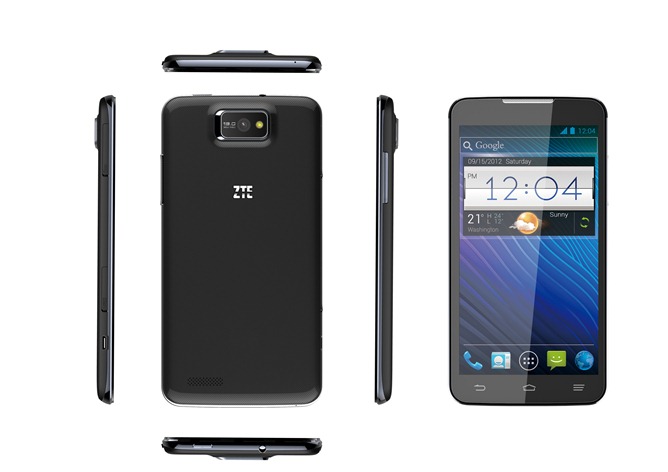 The ZTE Grand Memo offers the ideal balance between the portability of a handset and the larger viewing and easier touch-interaction experience of a tablet. It features a 5.7-inch, high definition, 720 x 1280 display, and a powerful Qualcomm 800 processor with quad-core Krait CPUs and 2GB of RAM. Combined with a 13MP rear-facing camera, 1MP front-facing camera and 1080 HD video playback, this gives users a smooth, high quality multimedia experience that is perfect for gaming and video.

The Grand Memo caters to those who are always on-the-go, with voice-response technology which allows users to answer calls safely while driving, and A-GPS and car-mode navigation system for high quality mapping and directions. It comes with a HD version of ZTE’s Mifavor user interface that is specially designed for smartphones, providing a simpler user experience, and ZTE’s Z Cloud service for the security and access-anywhere provided by cloud services. It also includes a 3200mAh battery for super-long standby time.

“The ZTE Grand Memo’s large, high definition screen makes it perfect for media and entertainment, but its uses reach far beyond that,” said Mr. He Shiyou, ZTE EVP and Head of the Mobile Devices Division. “With ZTE’s custom Mifavor UI, a powerful processor, and LTE connectivity, this device offers users a wide array of benefits that go well beyond the capabilities of the typical handset.”

“Qualcomm Snapdragon platforms are at the heart of over 770 announced smartphones and tablets, and we are thrilled to work with ZTE to bring the Grand Memo to consumers,” said Raj Talluri, senior vice president of product management at Qualcomm Technologies.

The Grand Memo is a slim 8.5mm, ensuring that its advanced performance is matched by its sleek appearance. The 1080P HD video and 13MP rear-facing Intelligent Camera, coupled with the 16GB storage memory make movie watching as sharp and detailed as the capturing of users’ own multimedia. Combined with high-speed LTE capabilities of the Qualcomm Snapdragon 800 processor, integrated Qualcomm WCN3680 802.11ac/.11n dual-band Wi-Fi plus Bluetooth solution for high-bandwidth communications, MHL and DLNA connectivity for mobile entertainment, the ZTE Grand Memo is perfectly suited for both personal and office use.

“We have really tried to make this device fun for use at home, and practical for use in the office. By combining both of these factors, we have created a well-rounded large-screen handset that is suitable for any situation. It’s perfect for videos, gaming and music, and also for sending e-mails, checking news and making calls on the go. For those with a busy lifestyle, the ZTE Grand Memo will be indispensable,” said Mr. He Shiyou, ZTE.

Key specifications of the Grand Memo

The ZTE Grand Memo is on display at Mobile World Congress 2013 in Barcelona at Stand 3C64/3C74, Hall 3. ZTE Grand Memo is expected to launch the second quarter of 2013 with specifications varying between countries and regions.

ZTE is the 4th biggest handset manufacturer in the world according to IDC, a leading provider of global ICT market research and advisory services.