Well folks, it's time for speculation and rumor on the Galaxy S IV to die... at least when it comes to the device's glamorous debut. Samsung Mobile division chief JK Shin confirmed to Edaily News (Korean) that the company's new flagship device will be revealed in New York City on Thursday, March 14th. The date was previously suspected after a well-known tipster leaked it earlier this week. Samsung has chosen to move its more typical European or Asian venue to the United States after it was "inundated" with requests from U.S. carriers to launch the device here. Let's hope that means that it will come to American shores quickly (or maybe even simultaneously) after a worldwide release.

Update: The invitations just went out - set your alarms for 7pm Eastern on March 14th and tune into the live stream on Samsung's YouTube channel: 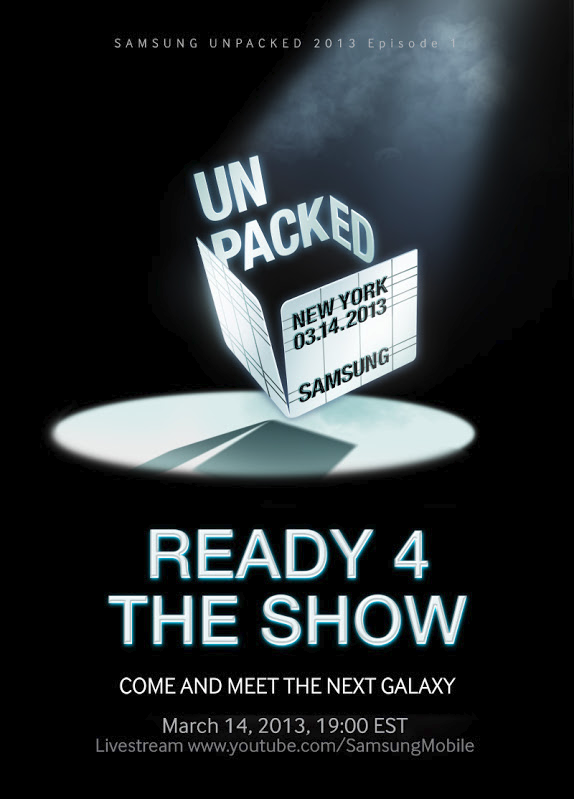 The location puts a spotlight on Samsung's efforts in the United States, where the Korean manufacturer aims to beat Apple on its own turf. Samsung is the undisputed king of Android smartphones, at least when it comes to market share, and the Galaxy S III alone has sold over 40 million units in various territories and variations to date. If current trends hold, you can expect the Galaxy S IV to do at least as well. Whatever changes Samsung makes to its industrial design with the S IV, expect them to inform Samsung's various smartphones and tablets following in 2013 and 2014, as was the case with the Galaxy Note II and other Android devices.

Samsung will eschew a trade show venue in favor of their own event, as they've been doing with high-profile device launches for the last year or so. With less than three weeks until what's sure to be one of the most important days in Android's calendar, expect the rumor mill to churn nonstop until zero hour. Samsung managed to keep the Galaxy S III under wraps until a little less than a week before the London event in 2012, and so far we haven't seen any compelling evidence of a leak this time around. A precise location and time have not been confirmed.

Congratulations, Samsung - you managed to turn Mobile World Congress into a sideshow for the second year running.