Yesterday, Google did what Google does best: announce a first version of something that is completely ridiculous, very few people care about, most folks mocked, and that will ultimately end up forgotten in the annals of internet history. No offense, Goog. Some later products are spectacular, but let's be real. Very rarely does Google get it right on the first try.

However, the Chromebook Pixel is still a huge deal and the savvy analyst should take notice, because things just changed in a big way. Google isn't selling a product with this new laptop, it's making a statement. It's planting a flag on the future because, well, no flag, no future.

So, what exactly is Google thinking, here?

Google Is Staking Out The Real Laptop Market

Contrary to popular belief, the market for full-size laptops (and to a lesser extent desktops) hasn't completely died off. Tablets are growing at an incredible rate, but there still remain quite a few people who want or need to own laptops. This is largely due to software. Windows and OS X remain the most powerful operating systems on the planet. Partly because they were built during times when command lines, file explorers, and automated scripts were the best ways to get things done, and they still retain much of that low-level tinkering ability (yes, even OS X is pretty powerful in that regard). More importantly, though, there are decades of app development behind them.

However, as long as people continue to sit down and do work for long stretches of time (read: until the universe ends), there will always be a market for full keyboards, larger displays, and more precise tools. This is why desktops and eventually laptops took off. You don't always need something that fits in your pocket or handbag, and electronics are cheap enough that realistically we don't have to choose one or the other. How many of us have a laptop and a phone and a tablet? It's not that uncommon.

The trouble is, Google is completely unprepared for this world. The company was founded in 1998 (yes, Google is barely a teenager), whereas its main competitors, Microsoft and Apple, have been around since the mid-70s. Despite appearing to be peers, if the companies were humans, Microsoft and Apple could be Google's mom and dad. (We'll leave you to decide which one gets which gender role.)

In that context, Google has a very pressing need to catch up to the real PC market. No, it's not the sexiest product segment, nor is it a huge growth driver, but as I'll get to in a bit, this isn't about growth. This is about completeness. Unfortunately, as much as we (and the world) love Android, it's not enough. If you're an Apple fan and you want to have nothing but Apple products in your life, you can do that. Google fans can't. Otherwise I might not be writing this on a Windows desktop.

Chrome OS has very obviously been the company's attempt at a fuller operating system and it's sort of worked. Chromebooks are decently popular. Acer says 5-10% of its shipments are Chromebooks, and Samsung's model is still the best-selling laptop on Amazon. That's big. But that's also because of the price. A $200 laptop is an easy purchase.

Up until this point, we've all operated under the assumption that Google has been content to let Chrome OS be a side project, something it updates once a year and lets other companies release cheap hardware for. It's not for most people. The Chromebook Pixel changes all that. Google is saying, "No. This the OS we're sticking with for laptops and we are prepared to see it through."

Google Is Making Real, Quality Hardware Now, All On Its Own

Google has a lot of ground to make up with its software. It's hard to deny that. As long as you can't use Photoshop, play AAA gaming, or do most of the stuff that you would need that Core i5 for, Google will continue to have work to do. You know where they're killing it, though? Hardware.

Disregard, for just a moment, the price and software. This is just an unannounced laptop running either Windows or OS X. Whichever you'd prefer. Look at that hardware. Does that look like something that Google made? Actually, yes. Yes, it does. Which says a lot about the company's reputation for design over the last couple years. More importantly, though, it looks good. It's not going to please everyone (in fact I can already picture at least some of you rushing to the comments to tell me how ugly it is and how wrong I am), but compare this to most laptops and between the high-density touchscreen, the glass touchpad, and the unibody frame, this thing is clearly on the high-end (aside from the bizarre and offensive 3:2 aspect ratio).

The biggest deal of all, though, is the name. This is the Chromebook Pixel. Not the Samsung Pixel. Not the Acer Chromebook P107. Not the Lenovo PixelPad. It's just the Chromebook Pixel. Google makes it. More specifically, it works with ODMs to manufacture the hardware. This is more or less exactly what Apple does. Apple works with Foxconn, for example, to build many of its products. Foxconn is an ODM. Apple does the designing and Foxconn does the building.

Only now Google's getting a piece of that pie. And the implications for that are staggering. Google has, until very recently, been purely a software company. It never made its own things (aside from the Nexus Q). That was silly! Heck, it couldn't. When the main OS it was pushing was Android, there was almost no way to manufacture its own stuff without pissing off other OEMs.

Today, the landscape has changed dramatically. Not only has the meteoric rise in Apple's profits proven that the best way to make money is to build your own hardware, but we also continue to see proof that it's the best way to make products. When there are as few gaps between hardware and software as possible, the engineers, the designers, and the consumers all win.

Google couldn't do that with Android. It still kind of can't (though we'll see what kind of effect the Motorola acquisition has), but Chrome OS is a whole different ball game. We're still kind of unsure why we would want a web browser to replace a whole operating system, but here's the thing: maybe it doesn't have to?

Google Is Building An Experience 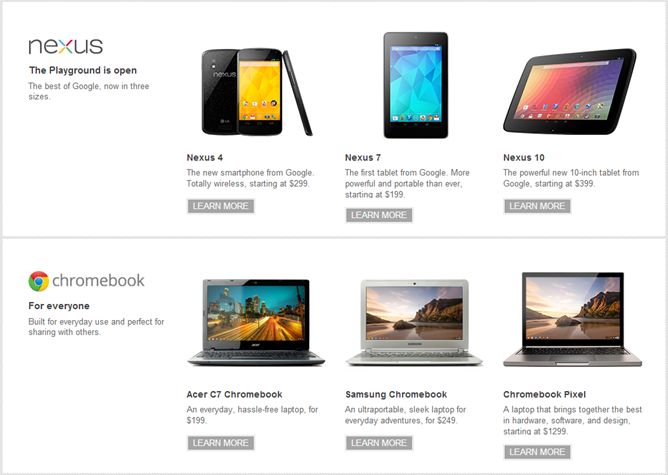 Here's what makes Chrome OS powerful. It can make use of NaCl, which is a sandboxed method of running native code inside a browser environment. In other words, while Chrome OS may be "just a browser", it's a browser that kicks ass, and can do a whole lot more than Firefox or IE can. For example, Bastion. Not only is this an immensely popular game (that costs $15 on Steam right now, implying this is a step up from your average Android game), but it can be run in Chrome on your Windows machine or on a Pixel. Right now.

One game isn't enough, though, right? Well, how about a productivity suite? Remember QuickOffice? Google bought the company several months back. We all figured it would be to improve Google Docs Drive. Well, we were wrong. It's actually going to come built in to the Chromebook Pixel. This $1,300 laptop will come with an office suite for free.

The software isn't there yet, but when you start adding up all the pieces, suddenly you start to see a model, a framework for selling laptops that looks remarkably familiar. If you were to seriously consider buying a Mac right now, most of you would begin by trying to justify the price over a comparable PC. Invariably, one of the arguments in favor of Apple is that it comes with all the software you need out of the box (this is more true for some than others, but go with it).

Here's the crazy part: Google is already most of the way to providing all the basics that people need. Email. Word processing. Calendar. Document storage. Maps. Video. Photos. Social networking. Google does a lot of what the average user needs and the web fills in most of the gaps. While the holes that exist are big, they're almost exclusively in areas where a lot of money is spent like gaming and content creation. These need to be addressed. They absolutely need to be addressed. And Chrome OS will continue to be a niche product until they are addressed.

However, Google knows that the future of software is the internet. Apps are at their best when they integrate with the online universe as fully as possible. Take Google Now. This is one of the most innovative products in the world, and most of it happens on servers halfway across the country or the world. The line between local and global is blurring.

Google Is Doing Things, But It's Not Nearly Done Yet

Is Chrome OS there yet? No. Not even remotely. But that's not the point. We will almost certainly hear some cool new announcements about the platform at I/O this year because what else can we get excited about? Some new version of Android with one or two cool features we'll play with for a week and then ignore until it's time to complain about how the carriers aren't updating phones fast enough? Call me crazy, but I'm not looking forward to that song and dance again.

There is one major area that Google needs to address, though: laptops. The future is ubiquitous platforms and self-branded hardware. Microsoft knows it. That's why we're seeing the company push so hard with the Surface. Sure, it wants to see other companies produce touchscreen hardware and fully utilize Windows 8, but ultimately, Microsoft wants to control its own destiny. Awkward and disjointed as it may be, it even has the platform to do it. Windows is on phones, tablets, laptops and desktops.

Apple has it covered, too. iOS powers media players, phones, and tablets, while OS X runs laptops and desktops. It doesn't have one unified, ubiquitous OS, but it's close enough for right now. Google has no such luxury. Whether it's scaling Android up, or building out Chrome OS's capabilities, it needs to do something.

That's what the Chromebook Pixel is about. It's a statement that Google is not just an internet company. It's not just the Android company. It's not just here to provide the software for other people's devices. It wants to sell its own products, be an electronics company in its own right, and to stand next to its elders and say "I belong here among giants." Whether it sells a ton of Pixels or not, Google accomplished two things: one, it's learned (and will continue to learn) lessons about making and marketing laptops, and two, it proved to the world that Google hardware is awesome.

The Chromebook Pixel won't sell. But the vision Google's pushing just might.