Google just launched a $1,300 laptop. That's a pretty big deal. In fact, it's a pretty huge deal. In double fact, if our team wasn't about to get on a podcast (see you at 8PM EST!) I'd be sharing all manner of reasons why that's a monumental deal. Unfortunately for you, that will have to wait until tomorrow. For now, we can only talk about the device itself. So, what is it? 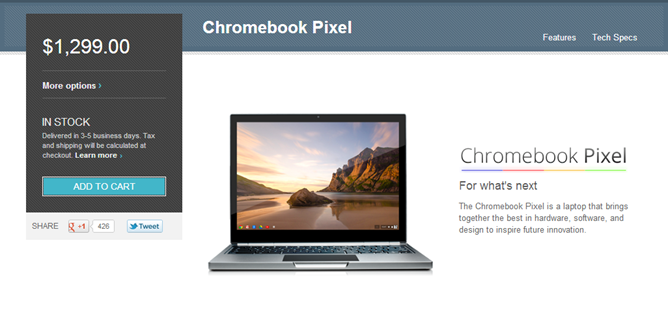 It's a high-end laptop with an incredibly dense display. 2560x1700 in a 12.85" screen for 239 ppi. Let me put that in layman's terms: holy mother of crap this screen is awesome. As if that weren't enough, it's a touch screen, too. Reportedly, it's not the best touch screen around, but this is a touch screen laptop. Does that sound familiar? Yet another reason this is a very important move for Google.

Here's the kicker, though: it's still Chrome OS. As much as we might love Google and Android here at AP, Chrome OS is still a browser-based operating system and its primary appeal thus far has been in being cheap and disposable. The hardware might look gorgeous, but you know what you can't do on this? Run Photoshop. You can't do any hardcore gaming either. It's just not supported. Heck, Steam has become so ubiquitous it's even running on Linux, and yet Chrome OS is still out in the cold.

There are a lot of reasons why Google building a self-branded, super expensive, high-end hardware laptop is a big deal. None of those have anything to do with normal people wanting to buy this thing, though.

Now That The President Has To Respond To The Phone Unlock Petition, Let's Talk About What He ...

Worms 2: Armageddon Coming To The Play Store In The Not Too Distant Future