Ok, here's a short and sweet edition of APK Teardown coming your way. Prepare yourself.

What's the one remaining thing a standalone GPS unit can do that Google Maps can't? (Besides work offline) Lane guidance. 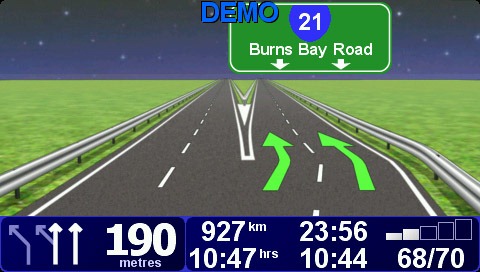 Right now, Google Maps would best be described as "Turn guidance." It will tell you when to make a right turn, but that's about it. Lane guidance is a step further: Your next exit is coming up on the right, and a TomTom (pictured) will better prepare you to make the exit by directing you to the right hand lane in advance. This saves you the surprise "turn right" command which suddenly means you need to cut across 40 lanes of traffic. Lane guidance also (usually) has information like the number of lanes, which lanes are turn-only, and things like that. It's great for complex interchanges.

It sounds like lane guidance is coming to Google Maps Navigation. In the latest update there is new, unused text for the "Report A Problem" feature, which is rather revealing:

So, apparently there is a version of Google Maps out there (probably the internal dogfood version) that will display the number of lanes on a road and turn arrows for each lane, presumably during Navigation. This would let Googlers drive around and test this, and give them an easy way to report problems with it.

Currently, this text is the only hint of this feature existing. Maps is still missing all the UI parts that this would need to work, like arrows, and a spot to put them. They either don't exist yet, or, more likely, Google is testing this and they meant to remove everything from the public version, but they forgot about the text.

Update: As a couple people have pointed out, most of the lane guidance systems, including the one pictured, use a 3D display for lane information. I found a "3D" button in Maps a few months ago, maybe they're related?

Here's hoping for a release soon. We'll keep an eye on it.