NVIDIA has officially unveiled its smartphone strategy with Tegra 4 this morning, and the star of the show is undoubtedly the new Tegra 4i platform - a low-cost, slightly down-market version of NVIDIA's Tegra 4 chip that was announced at CES in January. And don't worry - the standard Tegra 4 platform will be featured in 'superphones' as well, T4i is all about the low to middle range of the market.

I understand, a budget chip may not sound like the most exciting thing in the world on paper, but remember - NVIDIA's budget Kai tablet platform is what the Nexus 7 owes its existence to. NVIDIA has something of a knack for developing low-cost, high performance hardware, and Tegra 4i is going to be taking that trend to a whole new level - because you've never seen a budget smartphone chip like this before. 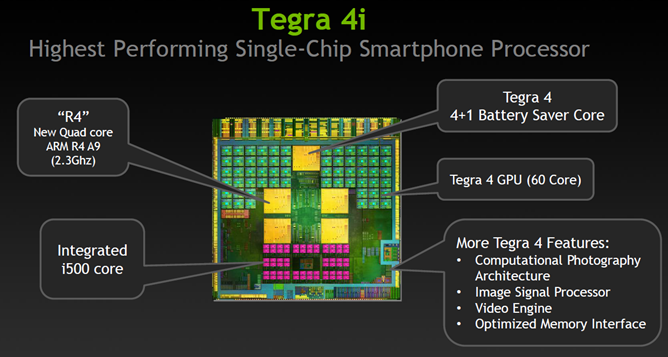 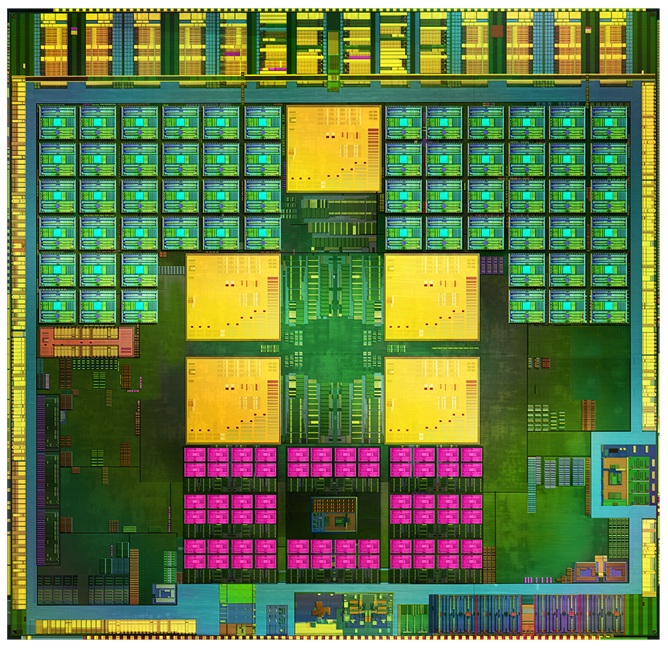 Tegra 4i, pictured above, is powered by a quad-core A9 'R4' 28nm processor, running at 2.3GHz, with the signature fifth power-saving core. There's a scaled-down version of NVIDIA's Tegra 4 GPU included, with 60 GPU cores. 2GB of RAM. This will also be NVIDIA's first chip with an integrated cellular modem, the Icera i500, and it's an industry milestone: this is the first smartphone chipset announced with what's known as a "software defined radio." We'll get into that in a minute. NVIDIA's newly-christened "Chimera" imaging technology (the fancy HDR stuff, known as "NVIDIA Computational Photography Architecture" at CES) is included as well. And it does all this on a die half the size of the comparable Qualcomm Snapdragon chip.

Now, chipsets are all well and good, but let's be real: gigahertz and RAM and cores are only so much fun to talk about of their own accord. They've got to be doing something to be really cool. Well, NVIDIA's pulled something of a rabbit out of its hat on this one (a rabbit that looks curiously like a phone), and also taken the opportunity to introduce Phoenix - the basis of what could very well be your next smartphone. 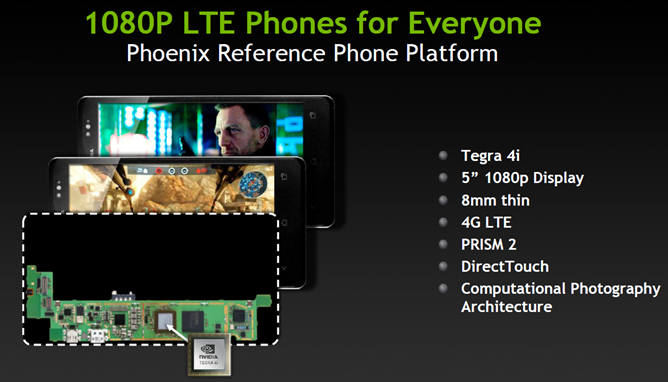 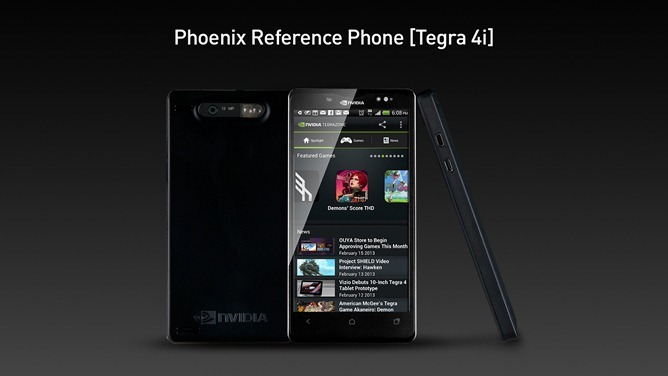 5" 1080p display. LTE. Quad-core chip. 2GB of RAM. Chimera HDR imaging. Sounding like a pretty good phone for something that's supposed to be "cheap," right? Well, that's Phoenix, and it's NVIDIA's vision for the Tegra 4i platform, much like Kai was its vision for Tegra 3 (on tablets). And like Kai, Phoenix comes with a price target. Are you ready?

$100-300 - unlocked. The range depends on the market, optional extras, and the respective OEM's price-setting strategy. But regardless, that's impressive.

Phoenix-based phones are expected to start shipping late this year, and into early next year (2014). And yes, that's a while off yet, but even given the pace at which current phones are advancing, I'd be willing to bet Tegra 4i and Phoenix will still be fairly formidable by year's end, especially at that absolutely mind-blowing price point.

Going back to the Icera i500 modem, the fact that it's software-defined will give NVIDIA and OEMs a lot more flexibility in terms of designing a single hardware platform for multiple networks. Now, it's worth noting that NVIDIA has officially confirmed that the i500 will not be compatible with CDMA networks, meaning you won't see any Tegra 4i phones on Verizon or Sprint any time soon. But even so, the i500 is a big leap forward, and will allow your phone to get significant radio software updates. Support for standards like 150Mbps LTE, carrier aggregation, and TD LTE make the i500 hugely more flexible than existing modems. Next Nexus phone platform, anyone? 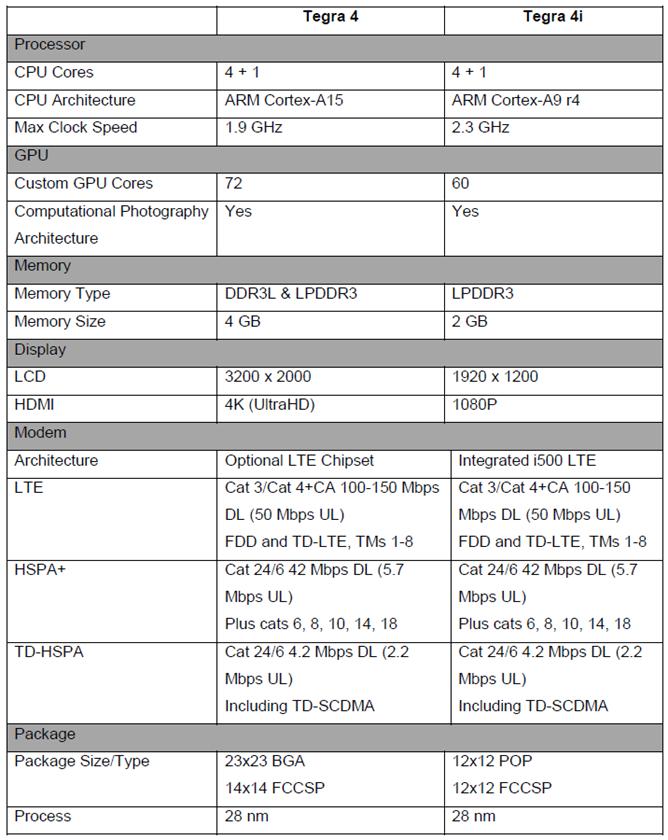 Along with Shield, this is shaping up to be a pretty big year for NVIDIA.

Tegra 4i Delivers Highest Performance of Any Single-Chip Smartphone Processor

SANTA CLARA, Calif.—February 19, 2013— NVIDIA today introduced its first fully integrated 4G LTE mobile processor, the NVIDIA® Tegra® 4i, which is significantly faster yet half the size of its nearest competitor.

Previously codenamed “Project Grey,” the Tegra 4i processor features 60 custom NVIDIA GPU cores; a quad-core CPU based on ARM’s newest and most efficient core— the R4 Cortex-A9 CPU— plus a fifth battery saver core; and a version of the NVIDIA i500 LTE modem optimized for integration. The result: an extremely power efficient, compact, high performance mobile processor that enables smartphone performance and capability previously available only in expensive super phones.

“NVIDIA is delivering for the first time a single, integrated processor that powers all the major functions of a smartphone,” said Phil Carmack, senior vice president of the Mobile business at NVIDIA. “Tegra 4i phones will provide amazing computing power, world-class phone capabilities, and exceptionally long battery life.”

Tegra 4i’s new 2.3 GHz CPU was jointly designed by NVIDIA and ARM, and is the most efficient, highest performance CPU core on the market.

“Tegra 4i is the very latest SoC solution based on the ARM Cortex-A9 processor and demonstrates the ability of ARM and our partners to continue to push the performance of technology and create exciting user experiences,” says Tom Cronk, executive vice president and general manager, processor division, ARM. “ARM and NVIDIA worked closely to further optimize the Cortex-A9 processor to drive performance and efficiency in areas such as streaming and responsiveness. This is an example of the collaboration and innovation that enables ARM technology-based solutions to be market drivers through multiple generations of SoC solutions.”

Utilizing the same architecture as Tegra 4’s GPU, Tegra 4i features five times the number of GPU cores of Tegra 3 for high-quality, console-quality gaming experiences and full 1080p HD displays. It also integrates an optimized version of the NVIDIA i500 software-defined radio modem which provides LTE capabilities, and makes networking upgradability and scalability fast and easy.

''NVIDIA’s Tegra 4i appears to outperform the leading integrated LTE chip significantly, and also benefits from an integrated ‘soft-modem’ that can be re-programmed over-the-air to support new frequencies and air interfaces – something other modem vendors can only dream of,” said Stuart Robinson, director, Handset Component Technologies Program at Strategy Analytics.”

NVIDIA also introduced its “Phoenix” reference smartphone platform for the Tegra 4i processor to demonstrate its unique mobile technologies. Phoenix is a blueprint that phone makers can reference in designing and building future Tegra 4i smartphones to help get them to market quicker.

The Tegra 4i mobile processor will be demonstrated in the NVIDIA booth in Hall 7, Stand #C110, at the 2013 Mobile World Congress show in Barcelona, Spain, on Feb. 25-28.