If there's one common issue with smartphones across the board, it's battery life. Rightfully so, we all want more of it without having to sacrifice usage. Thankfully, Qualcomm is looking to help owners of Snapdragon-powered smartphones get just a bit more out of their device's battery with the new Snapdragon BatteryGuru beta.

In a nutshell, it monitors your usage, "learning" what you do with your device. It discovers where you connect to Wi-Fi, what apps you often use, when you sleep, and the like. From there, it automatically configures certain aspects of the device to optimize battery life, like disabling Wi-Fi when you're away from common hotspots, and re-enabling it when you're back in the area. Pretty neat. It also lets you manually configure when apps can run, but that's purely optional – the app is made to be mostly automated.

In a way, it slightly reminds me of the recently released Greenify app, which allows rooted users to "force" certain apps to sleep when they're not in use. I imagine BatteryGuru does something similar, except it doesn't require root to do its job. 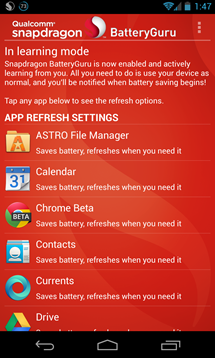 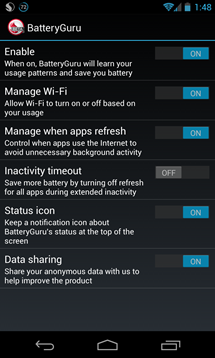 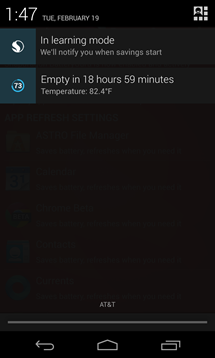 After installation and set up, BatteryGuru takes between two and four days to monitor your usage, and will notify you once it has begun optimizing your battery life. It all sounds great – it's yet to be seen whether or not it actually works, though. I've installed it on my Nexus 4, so we'll see what happens.

If you'd like to give it a shot for yourself, it's a free download in the Play Store (Note: for Snapdragon devices only!) HTC One Will Arrive In The UK On March 15th On Vodafone, Pre-Order On Clove Now For £425 Editorial: The One Is Exactly The Phone HTC Needed To Build... A Year Ago