The term "Multiplayer Online Battle Arena" (MOBA) is a relatively new way to refer to an old idea: a multiplayer, somewhat symmetrical game, in which teams of players face off against each other. It's the bread and butter of online shooters and racing games, but up to this point hasn't enjoyed much success on Android, just because mobile controls aren't well-suited to the ultra-twitchy competitions that comprise most of the genre. Developer Overdose Caffeine is trying to change that with Pocket Fleet, a free space-based MOBA. 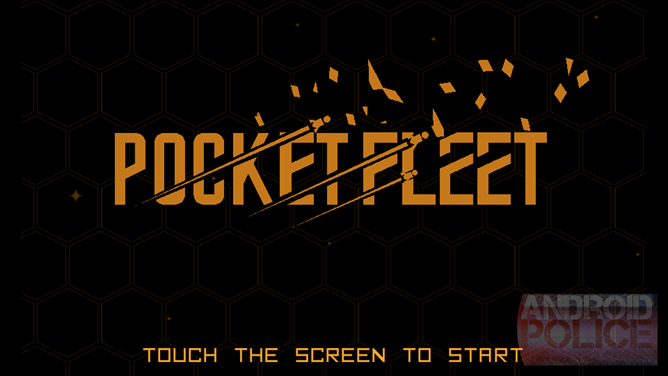 At its heart, Pocket Fleet is a space shooter in the vein of Asteroids. You get a single, relatively small ship, two weapons, and a 2D arena. Your objectives are twofold: destroy the enemy players in ships similar to yours, and destroy the enemy shipyard, before they can blow up your own. There are also dogfight, capture the flag and player versus environment modes. Between the multiplayer aspect and the ability to choose your ship and your weapons, it's a unique experience. While not without its flaws, anyone looking for mobile-friendly and fast-paced competition should give it a try.

When you first run the game, you'll have to create a unique ID and password. Luckily this isn't tied to any existing account. Pick the humans or the robots (basically) and jump into a quick battle, or look for a room. When going the quick route, you'll usually be assaulting computer-controlled opponents (green), whereas the battle rooms will have you killing real, live humans on their phones. There isn't any difference in the play mechanics, but a good human will always give you a better challenge. 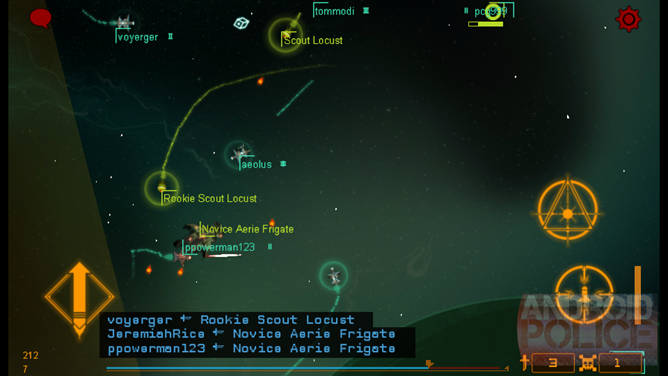 Controls are extremely simple. The game is played entirely in 2D, though the ship models were recently upgraded to 3D polygons. Tilt your phone to the left or right to turn port and starboard, and the camera will stay centered on your ship. Press the boost button to accelerate, and use two buttons for guns/lasers or missiles. Movement is zero-G with a little friction, so you'll have to master the momentum and turning speed of your ship to be effective. It's not exactly Wing Commander, but anyone who's played a top-down shooter will be able to pick it up relatively quickly.

Your number one priority is the enemy shipyard. Other fighters/players will try to stop you, but you won't win unless you manage to fill it full of plasma before they get to yours. In games with three or more people on a side, it can be advantageous to leave one defending, but most of the time the big ships will shoot opponents down so quickly that it's more effective to go all offense. Since the shipyards have two or three times your own armament, a hit-and-run strategy works best: get to the enemy ship, let loose a few rounds and a missile, then get out before it can react and destroy you. If you manage to survive for more than a minute or two, you can re-dock at your own shipyard for repairs or a change of equipment. 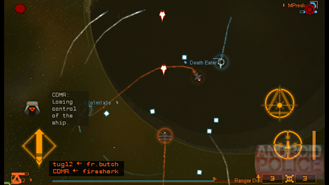 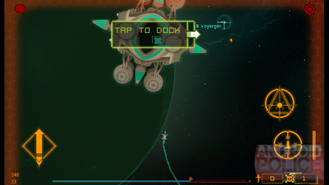 You can mix things up with Capture the Orb or player-on-player dogfights. The dogfight mode is the weakest of the three, in my opinion. Dogfights between players usually boil down to which one can turn the quickest and fire missiles with accuracy. While the skills employed are basic, they are necessary - you can't just load up with the biggest guns and expect to win.

When you start out as rookie pilot, you naturally get the smallest, weakest ship and weapons. You upgrade your arsenal with kill points: 100 or 200 for killing a smaller opponent, and a measured amount of points for the damage you do to enemy shipyards. While the cost of equipment can be discouraging when you first start out, the points will rack up quickly. Matches rarely go for more than five minutes, and a win will usually net you more than 1000KP. Even a losing game with no kills will get you 300 - there's no penalty for dying beyond a few seconds of spawning time.

Overdose provided me with a totally open, unlimited account for this review. I was pleased and surprised to find that in player-versus-player matches, the baddest ship and the biggest guns didn't make that big of a difference - while you can sit in space and wail on the shipyard faster, you'll also become a priority target, and skilled opponents can fight and beat you in smaller, quicker ships. Before long I was back to my personal account, without any real sense of constriction. There are couple of in-app payment ships and weapons that are exclusive, but again, they won't be a deciding factor as long as players on both sides are even halfway skilled. (And IAPs in multi-player games are not something I take lightly.) There's clearly a fine balance in the game, an integral part in any battle arena... or at least any that hopes to remain fun for more than a few minutes. 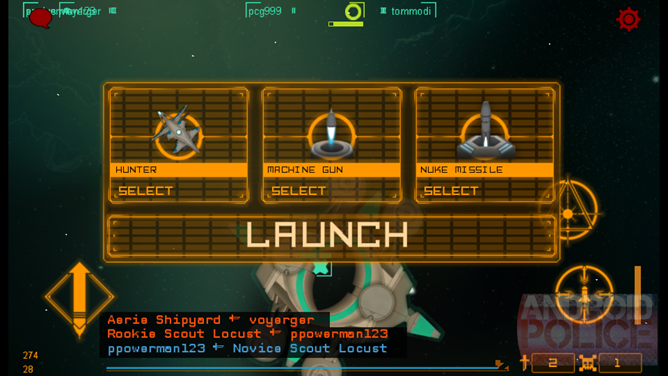 Unfortunately, things are somewhat slanted towards the humans at the moment, because players get a boost for joining the faction. Perhaps the developers are using this element to even things out. If you're having trouble in the player-versus-player battles, spend a little time grinding in Invasion games, which will both sharpen your skills and provide you points for quick upgrades.

Graphics are simple, but attractive. The design of each faction's ships are not complicated, but there's enough distinction between them that you can clearly tell who's who on the battlefield. The interface is presented in a mix between the LCARS from Star Trek and a bit of Tron neon - a big plus for scifi junkies like yours truly. Anything more complex in the visuals might make it harder to keep the gameplay fast. As it is, I'll periodically get a low ping notice in an area with mediocre cellular coverage.

There's a story there, sure enough -  a three-minute trailer featuring a guy with a really deep voice spells it out for you. The gist is that three generational fleets have returned to Earth at the same time, and duke it out: blue for old-fashioned humans, red for Cylons cyborgs, and green for bio-engineered creepsters. Apparently it ties into a more ambitious strategy game that's yet to come. All you really need to know is, shoot the guys who aren't the same color as you.

The only really disappointing part of the game is the audio, which is so basic that I often found myself tuning it out. The battle maps were also a bit cramped - some environmental hazards and more breathing room could go a long way towards improving things. But the developers have been steadily updating the game, and as long as the excellent balance remains, I see nothing but good things for its future.

Pocket Fleet is a simple game, but for the right kind of player, it's got an addictive quality that's enhanced by the multiplayer team aspect. Three buttons and a tilt steering mechanic won't create the kind of depth that serious MOBA players crave, but for a mobile game, it doesn't have to. For five or ten-minute stretches, it delivers white-knuckle fun with the satisfaction that you're playing against real people. 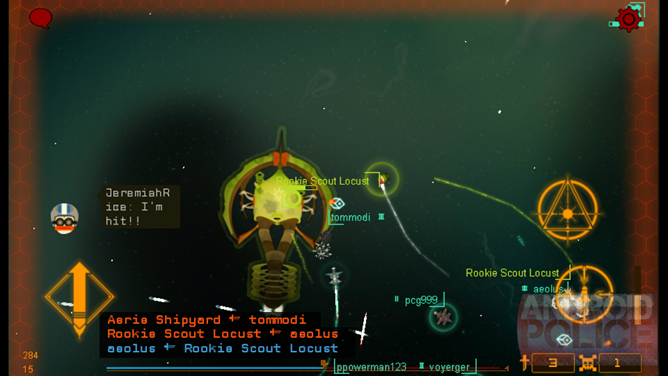 The game's strongest point is its balance: newbies won't be destroyed by veteran players (in so much as a game this new can have veterans) and those who've spent money on in-app purchases won't be able to win matches by themselves. As long as the player population holds up, Pocket Fleet should remain an excellent mobile multiplayer game. I'm looking forward to more updates - watch your six for "JeremiahRice" on team battles.