We've all had to deal with it at one point or another: a rogue app hiding out in the background, chomping away on the battery. Or perhaps a bunch of pre-installed junk is taking up all of your device's precious RAM. No matter how you slice it, unwanted background apps are a nuisance. Now, there are a number of ways to do away with these apps, but none of them are what we'd call "great." For example, you could freeze them with Titanium Backup Pro, but then you can't launch them without unfreezing, and that's a pain. Or you could use a  task killer(*shudder*), but those aren't good for anyone. Ever. Under any circumstance. 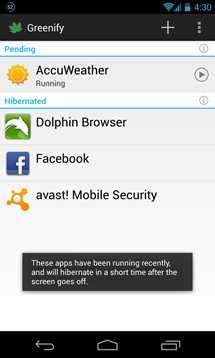 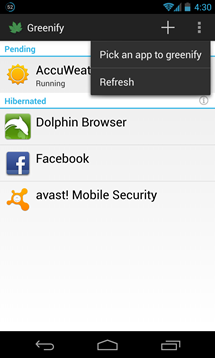 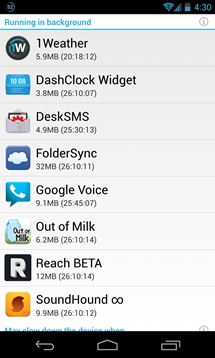 So, what's the solution? Greenify. This new app lets users with rooted devices choose which apps should be hibernated when they're not running in the foreground. This is the best of both worlds, because it allows you to continue using your favorite apps, but prevents them from running all the time (I'm looking at you, Facebook.)

Using it is quite simple: once installed, you just choose which apps you want to hibernate, and that's it – you can even select from the currently running apps. Then you're free to launch them as you please. Once they're no longer in the foreground, they'll remain in the background until the screen is turned of for a short period of time (smart!). After that, they'll be kicked out of memory and into a hibernated state.

Of course, keep in mind that there are apps that should remain in the background; like alarm clocks or instant messengers, for example. If those are killed, they simply won't work. And that's not a good thing.

Overall, Greenify seems to be a very simple, elegant solution to a constant problem on Android. Best of all, it's completely free – hit the widget to grab it.

[New App] Tapestry Is A Collection Of Short Stories That You Read By Tapping, But You Can't Go Back