Amazon isn't exactly impartial when it comes to tablets... you may have heard about this little thing called the Kindle Fire. But they aren't ones to let competition get in the way of a little profit, which is why the latest update to their storefront app includes compatibility with a plethora of new Android tablets, including the coveted Nexus 10. Previously it was limited to Android 4.1 tablets with very specific resolutions. The free app is available on the Play Store. 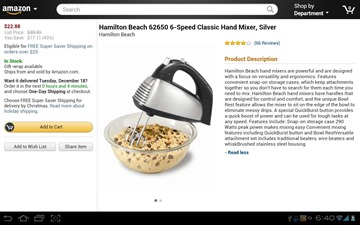 Resolution support has been bumped up to 2560x1600, which includes the Nexus 10 and probably a few more tablets in the first half of 2013. You'll still need a device with at least 1024x600 resolution and Android 4.0 - what few Honeycomb users remain will just have to make due with the web interface. There are also a few standard bugfixes and performance bumps. Price comparisons, galleries, full reviews, and a snappy interface are all unchanged from the previous version.

Thanks, Amazon... now how's about that video app?