Put this one in the "weird but true" pile - researchers at Erlangen University in Germany have managed to dump the contents of a Galaxy Nexus's RAM... which doesn't sound exciting. Except for the fact that the phone had a PIN-protected lockscreen and encrypted internal storage. The technique used, known as "FROST" (clever acronym there, guys), has been demonstrated on computers before.

Step 1.) put the (powered-on, if it's off you lose the valuable RAM contents) phone in a really, really cold freezer. Step 2.) develop software that allows you to dump the active memory from an Android smartphone via USB (you might want to do this before step one). Step 3.) Pull the battery (or turn the phone off, though this may cause issues), boot into fastboot, run the dump software, and voila - data stolen. 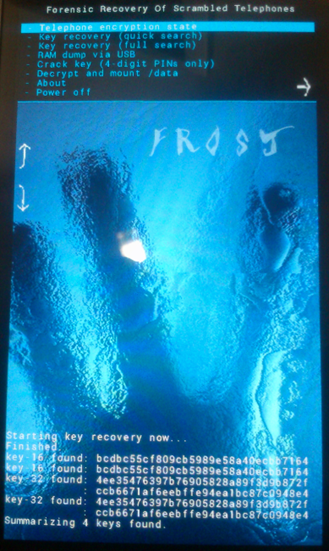 The trick here is more physics than computer hacking - while RAM is a volatile storage medium (it requires an electrical current to maintain the data it stores), it's not in the "on/off" switch sort of way you might think. When the RAM loses power, it maintains the integrity of the data it stores for a brief time. At room temperature, this is usually a couple of seconds. At 5 degrees Fahrenheit, though, the level of resistance in the memory's circuitry is reduced, magic happens, and the data is retained for a longer amount of time. In this case, around six seconds, which is enough time to dump the contents of the RAM over USB.

The researchers claim they can go a step further and recover the device's decryption keys in RAM, but actually using those keys to any effect would require an unlocked bootloader. Is this something you should be concerned about? Probably not. Is it a neat science experiment? Definitely.