Popular cross-platform messenger service WhatsApp is a little behind the times. It's part of the depressingly huge collection of Android apps that ape their iOS counterparts, never aspiring to anything higher. That appears to be close to an end, as the latest beta release of the Android client has a new user interface, and it conforms to the Holo guidelines that the rest of your phone (hopefully) uses. Google+ user Jose Luis de la Torre took some shots of the updated interface. Observe: 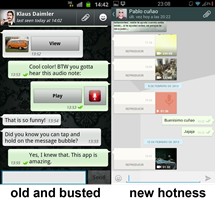 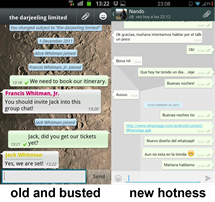 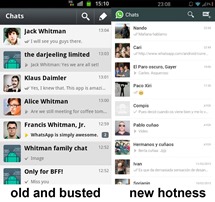 The version in the Google Play Store hasn't been updated yet, so you'll have to go off-market to try out the latest release. The free APK file can be found at this link. The trial period lasts for a year, with a $.99 service charge per year after that - those who have already paid will not be re-charged for using the beta.

By the way, the plaintext security issues that we reported on last year have been fixed, according to WhatsApp, and the exploit application has been removed from the Play Store.

[Deal Alert] HTC One VX In Red And White Is $.01 From AT&T And Amazon Wireless, Respectively