International trademark, patent, and copyright law is a bit of a legal minefield, and Apple has proven itself to be among the best in navigating it these last few years. But there is one exception to their otherwise impressive track record: the lucrative South American market of Brazil. While Apple iPhones have been sold in the country for years, Apple has never owned the trademark for the name. A regional phone manufacturer, Gradiente Eletronica, registered the trademark for "iphone" way back in 2000. 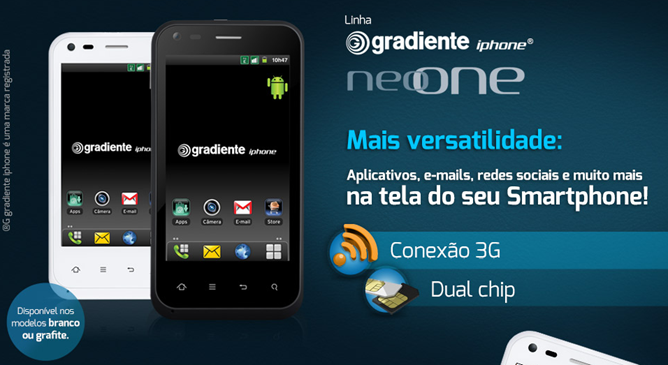 That didn't stop Cupertino's legal bulldogs from suing Gradiente after they released the iPhone Neo One, a ~$300 mid-range Gingerbread phone, in December. Today a Brazilian court dismissed the case and upheld Gradiente's trademark, denying Apple exclusive rights to the name in the country. The iPhone Neo One is the first Gradiente smartphone that uses the iconic name, more than twelve years after the application was filed and four years after it was officially accepted in 2008. It doesn't resemble Apple's iPhone, or at least no more so than any other slate Android design.

That said, Gradiente seems to be rubbing the legal situation in a bit. You don't need to know Portuguese to get the gist of this promotional video, posted on the iPhone Neo One's marketing page.

According to a report by the BBC, Brazilian law does not require trademark holders to reasonably defend their brand - it's a first come, first served system. That makes Apple's suit somewhat moot, despite the fact that they've poured millions of dollars into the product and brand over the last six years while Gradiente has done almost nothing with its trademark.The ruling means that Graiente can sue Apple for trademark infringement at any time with a reasonable expectation of success.

Newshounds might recall that before the original iPhone launched, Apple settled with Cisco, then the owner of the "iphone" trademark in the US and UK thanks to a previous line of VOIP devices. Gradiente may be looking for a similar payout here: a company chairman was quoted as saying, "We're open to a dialogue for anything, anytime... we're not radicals." A cynical observer of international business might conclude that Gradiente released a single "iPhone" model specifically for this purpose.

Apple will likely appeal the case to the Brazilian Institute of Industrial Property.