Want An HTC One VX for V-Day, for practically nothing? Then head to AT&T's website or Amazon, depending upon which color you prefer. Both have the device on sale for $.01 with a new or extended contract, but AT&T has the red version, while Amazon has the white. The regular subsidized price from both retailers for the phone is $49.99. I'd go with the white ( it looks a little more snazzy) but there's no accounting for taste. It's the cheapest we've seen this model, and both phones come with free shipping. 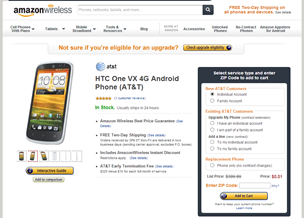 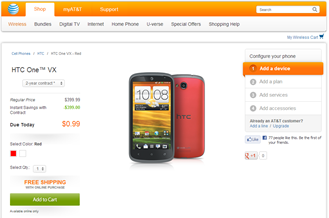 If you need a memory refresh, the One VX is an updated version of the original One S, with a dual-core 1.2Ghz Snapdragon processor, 4.5-inch 960x540 LCD screen,a 5MP camera, Ice Cream Sandwich (with 4.1 Jelly bean promised), and 8GB of storage. While HTC kept the svelte dimensions, they added a MicroSD card slot, a major complaint for the One S.  The One VX shouldn't be confused with the One V (which is the model below) or the One X (which is the model above). Yeah, we think the names are dumb too.

The red One VX is on sale at AT&T for today and tomorrow (February 14th) only. Amazon's deal doesn't have an expiration, but they often change pricing without warning, so order one soon if you want it. This is a pretty sweet deal on hardware that's less than six months old, but even so, hold on to your wallets if you have to have the latest and greatest. The HTC One, AKA the M7, is due for a debut next week.