It's surprisingly hard to make a mobile game, or at least, a mobile game that's worth playing. Mobile developers are still in their infancy, at least compared with their console and PC counterparts. So when someone manages to release a fun, polished game that works well on smartphones and avoids some of the more glaring pitfalls of the platform, we sit up and take notice. Such is the case with Roller Rally: Snake Pass, an Android port of a popular iOS title from MilkyTea.

The premise of Roller Rally is simple. Four animals are in a roller-skating race down a mountain, and the first one across the finish line wins. Gameplay is a mix of the popular "endless runner" genre, racing, and exploration. While the game utilizes a one-touch control scheme, it's got surprising depth, and something that's altogether absent in many recent Android titles: challenge. While Roller Rally isn't perfect, it's a lot of fun, and excellent design make it easy to overlook what faults are there. As a bonus, you can hand this one to your kids without having to worry about the content.

You are Iko Disko, a stuffed rabbit just trying to get by in the ruthless world of downhill roller skating. Or something. There's no story in Roller Derby: a rabbit, a squid, a bull and a gelatinous monster are racing for the thrill of it, and they let you know throughout the game with whoops and hollers. Each of the 19 levels starts with the four protagonists starting on a short downhill journey. 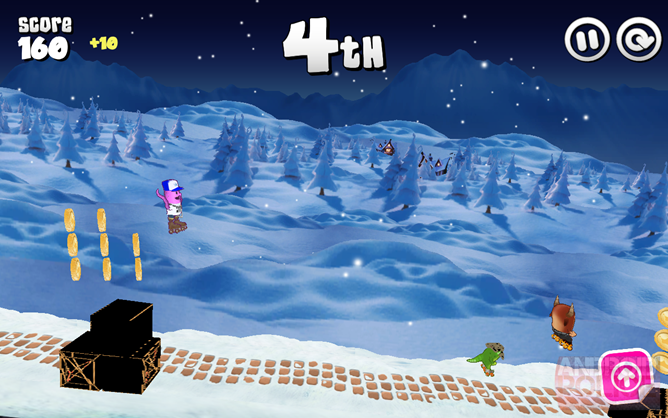 Various jumps, obstacles, swings, cannons and other detritus litter the 2D racing track, and you'll have to navigate them all in order to beat your digital opponents. A single tap will make your character jump, another will make him jump again in midair, and holding a tap makes him spin. (An optional two-handed control scheme will let you control the direction of spin, otherwise you've only got control over the speed.) Land with your wheels to the ground and you'll get a tidy speed bonus. Land a few degrees off, and you'll get a face full of snow, dirt, sand, or (ouch) cobblestones.

Despite the simple premise, there's a surprising amount of depth in Roller Rally. While avoiding last place is usually easy, you'll need a firm handle on both the levels and the game's physics system to find your way to first. The physics system is the gameplay's only real downside: the mechanics are easy, but aligning your character's skates with ground a hundred feet below you and outside of the frame of view is guesswork. Every once in a while, you'll get a speed boost while doing a face plant, forcing you to imagine what happens to a squid if his skates suddenly propel him forward while his nose is in the dirt.

These moments, while annoying, are few and far between. While you could certainly blast through the game hunting first-place finishes in all the levels, there's more replay value to be had in maximizing your points on each stage. Between the coins, golden carrots, and the branching paths, Roller Rally becomes an interesting mix of Tony Hawk-style situational awareness and Angry Birds perfectionism.

The stages themselves deserve some attention. I haven't seen level design like this in a long time: after the first few training missions, levels can branch into two or three separate paths at once, one favoring speed, the other tricks, and the other exploration. Since landing decent flips is the only real way to get a speed boost and collecting coins and carrots is the way to unlock new characters, there's plenty of motivation to try everything. 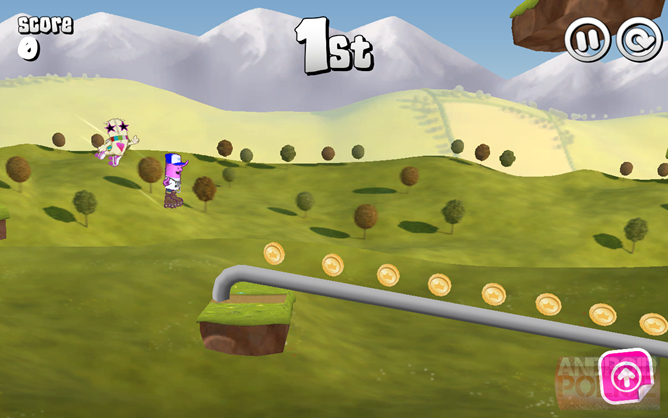 Ski jumps, loop-de-loops, and Donkey Kong cannons mix to keep your character moving forward constantly. A quick choice between paths can mean the difference between a third place finish and a first - and often it's not the more obvious, speedy choice that will see you through. After a few runs, the levels become more about knowing the layout than beating your opponent. To get the best time, the most points, and the gold medal, you'll need a nearly perfect run.

On the downside, some of the more obtrusive elements of the game can stop you dead in your wheels. Land wrong on an uphill slope, and you'll find yourself rolling backwards. At that point you might as well start the level over, since finishing in fourth won't allow you to submit scores or keep the collectibles you find. Even so, getting through to the end of some of the later levels is an accomplishment.

While the graphics in Roller Rally are nice, they're not going to push any high-end devices to the limit. The game utilizes the popular "2.5D" perspective: characters and environments are three-dimensional, but the gameplay itself is entirely two-dimensional. Characters are cute with some surprising ingenuity, and backgrounds are colorful and busy. It's the kind of thing that kids under 10 will love, and it won't get on your nerves if you're older.

I wish I could say the same about the sound design. While the characters' various whoops and yippees are entertaining, the simplistic music will grind on your brain after just a few levels. It's best to disable the music entirely, especially if you're in a difficult level that necessitates repetition.

Is Roller Rally: Snake Pass worth the measly $1.09 price of entry? Without question. Anyone who enjoys casual games will find something to like, and be able to look over the few faults within. There's not an in-app purchase to be found, no annoying advertising - pay a buck and change, and get a fun game. It's amazing how gratifying that can be. 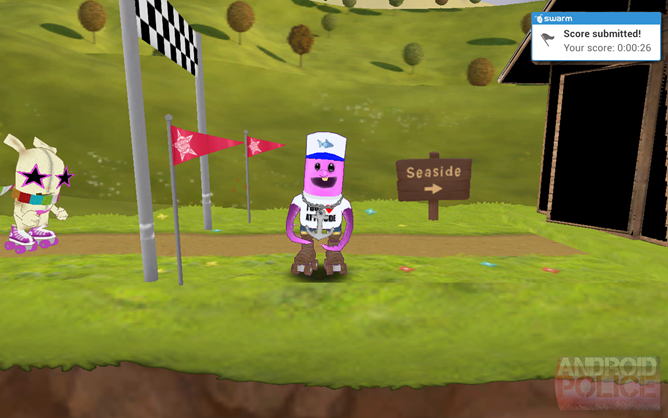 While I wish there were a few more levels and a multiplayer option, there's no denying that Roller Rally is a well-made game. Here's hoping that MilyTea brings more content over to the Android side of the aisle.

Note: Some users are complaining of compatibility and crashing issues, especially on the Galaxy S III. I played on the Nexus 7 and had no problems. 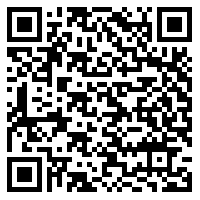