Google Voice is a great service burdened by a lack of support, integration, and easy way to sign up (unless you're on Sprint, of course). Those who do decide to jump the hurdles and either get a brand new number—or port their existing one to Google—will find themselves in an uncomfortable paradise. On the one hand, you can text from your desktop, tablet, or phone completely for free which is awesome. On the other hand, you have to use the Google Voice app, which is not that great. 'Messaging + Google Voice', however aims to alleviate that problem a bit. 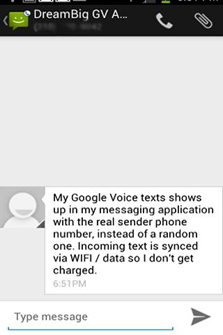 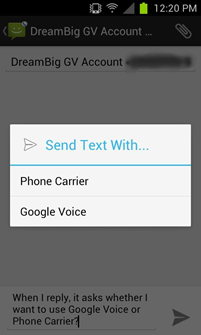 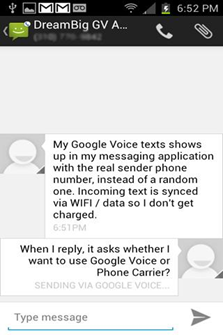 With this app you get what is essentially the stock Messaging app. However it adds the option of sending and receiving messages from your Google Voice account. Depending on what carrier you have and how you text, this could result in a single, consolidated SMS experience. There are, however, a few caveats:

It's not perfect, but under the right circumstances, this could be a great way to simplify messaging for GV users. The app is much faster than Google Voice and that's reason enough. However, what's even cooler is that it doesn't require a GV number. So, if you just want the stock Messaging app on a skinned device, this would work for you, which is a better reason than any to download it.

The app is free to install, however what you're getting is only a trial run. After you send or receive 30 messages via Google Voice, you will be prompted to purchase a Pro license for $4.99. This certainly seems a little steep. On the other hand, there aren't many options out there that support Google Voice. Then again, if you don't use Google Voice at all, you won't ever leave the trial period, and it will be free forever. Further proving that the best possible use-case for this is to replace whatever skinned Messaging app you have on your phone. The stock version really is quite nice.

*Ignoring the very weird cases involving a Sprint number sending an MMS to another Sprint number and an email goes somewhere or something. Honestly that implementation is so confusing that we still regularly get tips from people who are shocked and think Google finally added picture message support for real this time. I'm a Sprint user and I still have no idea how it works.