Since the Nexus 10's launch, users have been itching to make use of the device's pogo pins. No word has yet emerged from either Google or Samsung about the dock we spied last Christmas or the pogo charger many assumed was in the works, but in mid-December, a thread sprung up on XDA opened by a person who claimed to have the fabled pogo charging cable in the works and nearly ready for sale. After much hurried speculation, it turned out the poster was telling the truth – the MagNector pogo cable (from Town Communication) began selling on eBay, with an official web front following close behind.

Whether the original poster's claims of being the original provider of the cable "to S in Korea" are true is yet to be determined, but after a few weeks of waiting, I finally got a hold of the cable and – naturally – had to give it a quick write-up.

There's really very little to say about the cable in terms of form factor. From end to end, the cable is four feet, two inches long (that's about 1.26 meters). On one end is a male USB plug that fits nicely into the block that came with the Nexus 10. On the other is what counts – six pogo pins and two magnetic chunks that snap into the Nexus 10's port like a hand in a glove. For those hoping to use the pogo cable as a night-time charging solution, the pogo head has a subtle groove on top, allowing for correct orientation in the dark. 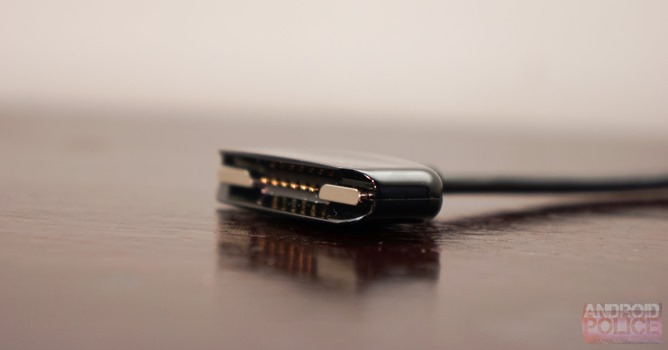 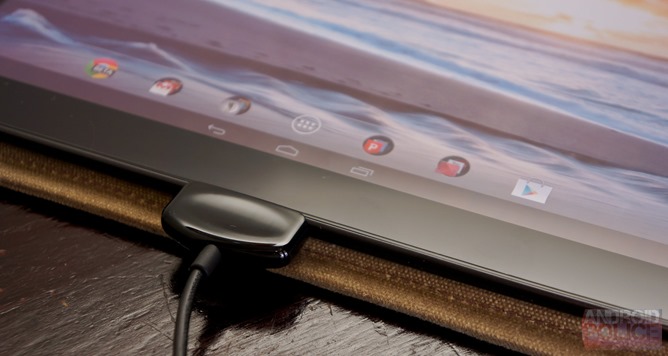 While the cord snaps securely to the tablet, it's pretty easy to disconnect, so if you trip over the charging cable, your Nexus won't go flying across the room.

This is the big question. So far, Nexus 10 owners seem to have two primary reasons for wanting a pogo charger – one, to save wear and tear on the device's built-in microUSB port and two, to charge the device faster. Whether the former works is obvious. The latter is the question that remains important to many would-be buyers.

In an extremely unscientific test, I charged the Nexus 10 from 14% (the normal warning level, when I would normally plug the device in for some juice) once with the pogo cable and once with the bundled microUSB charger. In both cases, the device's screen was turned off, only occasionally flicking on to check notifications or take a peek at the battery level.  Charging to 100% with the pogo cable took around four hours, twenty-seven minutes. At the same time mark using microUSB, the Nexus 10 was up to 90%. For reference, that's about 22% per hour vs 20% per hour.

I also tried charging while using the tablet for ordinary purposes like watching video and browsing the web. Whether I was watching an HD movie with Google Play or downloading a couple of files while catching up on the news, the cable still charged the tablet (rather than draining the battery further, as sometimes happens with the microUSB cable), albeit at a slightly slower pace (about 1% every 3-4 minutes).

Those interested in following (or joining) discussion around exactly how much faster the pogo cable charges – and why – would be well-advised to check out this XDA thread.

One other concern that I had before using the cable was whether it would interfere with Google Voice Search – after all, the magnetic elements would be covering up a microphone at the bottom of the device. Happily, Voice Search works unhampered by the cable. 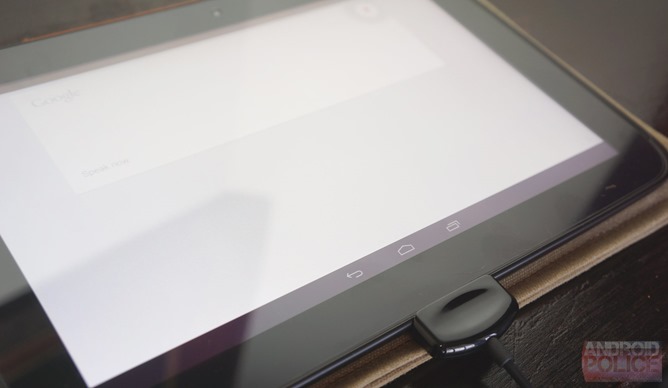 One thing your Nexus 10's microUSB cable has over the pogo cable, though, is data transfer. The MagNector cable is strictly for charging – no data transfer of any type. Additionally, users have reported that using an OTG cable in conjunction with the charger may cause the cable to stop charging until the OTG is disconnected.

Where Can I Get One?

Good question. Availability of the pogo cable is a little tricky depending on where you live, so here's a quick breakdown.

So, is the pogo cable worth its price? It's by no means a must-have accessory for every Nexus 10 owner, but if you want marginally faster charging, want to keep your microUSB port clear of any potential damage, and you've got about twenty bucks to burn, go for it. In the mean time, if you've got a burning question about the cable that wasn't answered here, ask away in the comments below.

[Weekend Poll And News Roundup] Has A Nexus Phone Become More Or Less Desirable To You In The ...