Look, Gamevil, we need to talk. You folks have been doing some fine work in the mobile gaming world, you really have. Zenonia, Baseball Superstars, Colosseum, well-made titles all. And I'm sure plenty of cash-strapped gamers appreciate that the vast majority of your games can be played for free. But in the last few months, you've become the poster child of everything that's wrong with mobile gaming. 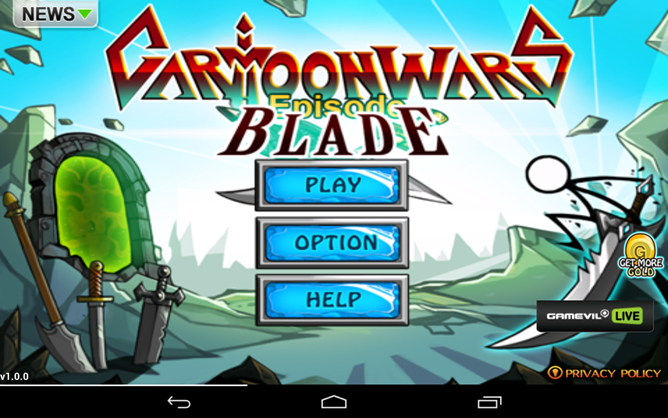 Case in point: your brand new entry in the much-loved Cartoon Wars series. Cartoon Wars: Blade takes a more old-school approach to the action genre, with simple Battletoads-style 2D fighting. There's a pretty interesting inventory and weapon system, too, with two active melee weapons and a ranged weapon functioning as a special attack. All fine and good. The problem is everything that's built around it.

Is There A Game In Here? 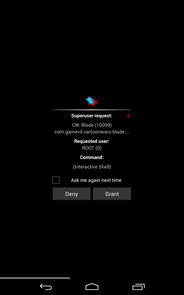 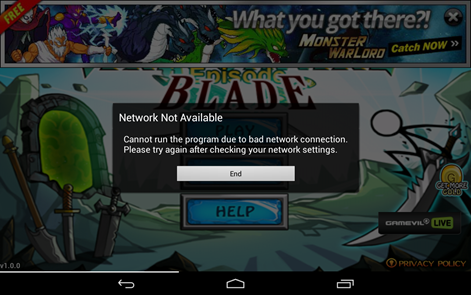 First of all, as soon as the game is launched, rooted users will get a root permission request. Stop that. I know you're trying to keep naughty gamers from cheating and getting free in-game currency, which directly impacts your bottom line. But it's affecting some of your perfectly legitimate customers in a very insistent and creepy way. With as much in-your-face marketing and in-app purchases as you have, you can afford to ignore a tiny subset of rooted cheaters. And I see that it requires a constant net connection. Not just an initial verification, either - players will be booted out of an active game if the connection is cut. Why, exactly? Did you think that no one would ever want to play off of a WiFi network? 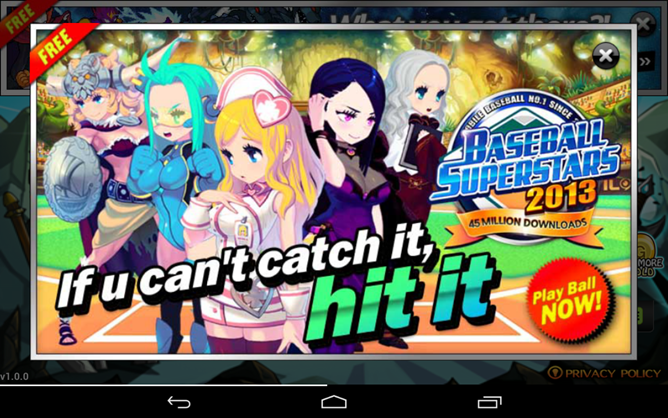 Now, before the game starts, players get a full-screen pop-up ad for Baseball Superstars 2013. I assume that it's for Baseball Superstars, because the title is right there in bold, and it's just possible that there's a baseball diamond beneath a chorus line of super-deformed anime strippers. I'll applaud your commitment to diversity on the playing field, Gamevil: your all-female team is comprised of a sexy nurse, a vampire, an android, a Viking, and one very confused-looking damsel in evening dress. But perhaps it should have occurred to you that marketing a franchise that fits firmly in the "Teen" category (or would, if your games were rated by the ESRB) before a game starring an ostensibly sexless doodle is sending mixed messages. Players can't advance the game without being sent to the Play Store page for BS2KIII or hunting for the "X" button among the yielding flesh and occasional glimpses of turf. 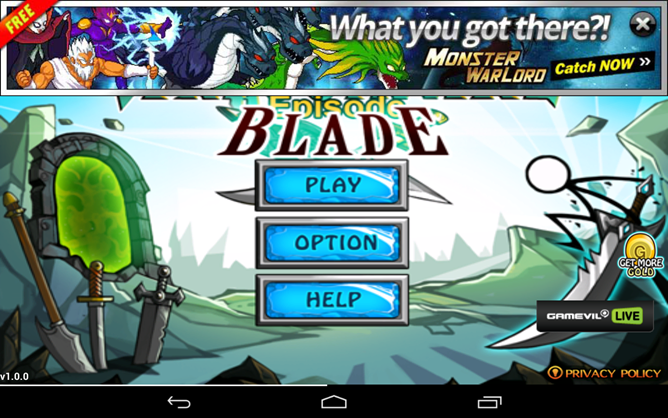 Now they're at the main game menu, only to be greeted with another ad, this time covering the title of Cartoon Wars: Blade (you know, the game I'm actually playing right now). Gamevil, do you want me to play this game, or spend the rest of the day browsing the Play Store? At least this one doesn't keep me from actually advancing, and can be safely ignored. Which is good, because I get the distinct impression that these 2002-era pop-up ads are never going away. 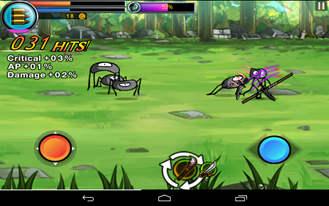 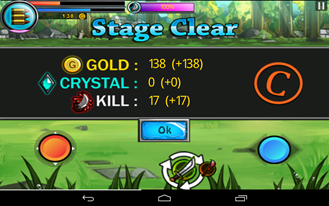 After a brief cinematic, you're presented with the inventory screen. We'll just skip this for the moment to get to the actual battle. It's a simple game: you've got two main melee weapons, short range and long range, that can be switched at any time. A limited ranged attack (a bow and arrow for starters) works as a special. The melee weapons wear out, so rely on one for too long and it will automatically switch. Why? I suppose steel gets tired. 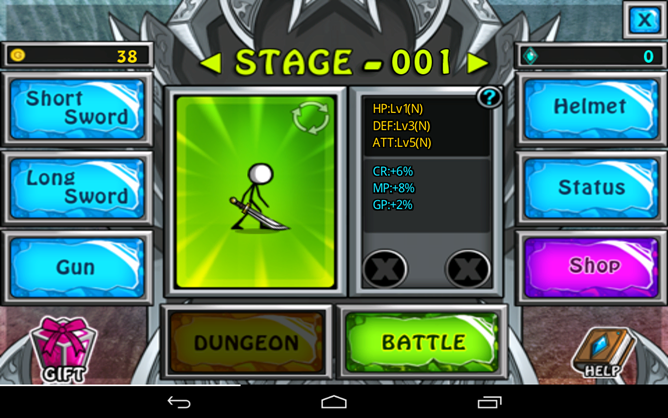 One surprisingly difficult battle later, and you're back at the inventory screen. So, an endless succession of bad guys interspersed with inventory management - why not, it worked for Battleheart. My first victory netted me with 138 coins and zero jewels, but surely that's enough to get me a sword that won't get winded after a few swings, right? 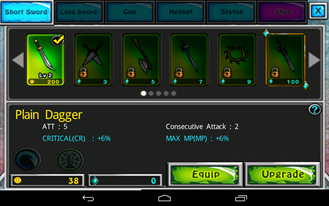 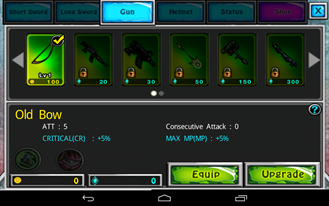 Nope. My valiant slaughter of doodled monsters is worth just enough to upgrade my dagger to Level 2, and nothing else. If I want a better sword, or something besides a "Cane of Love" (no, I'm not making that up) for mid-range attacks, I'll have to find some jewels. My character seems to have been behind the door when the long-range weapons were handed out, because the next step up from a bow and arrow is a freaking machine gun for twenty jewels - and keep in mind that I haven't seen one yet.

But of course, this is a Gamevil title! I can always pay to advance! It's a good thing that the in-game store is accessible from literally every game screen that isn't an advertisement or an active battle. For a single dollar, I could get enough gems to buy weapons that will unleash a cartoon genocide... at least for the next few levels. When I'll invariably need to buy some more. A $50 purchase, enough to buy a full PC game or dozens of paid mobile games, would probably have me set for a month of play. 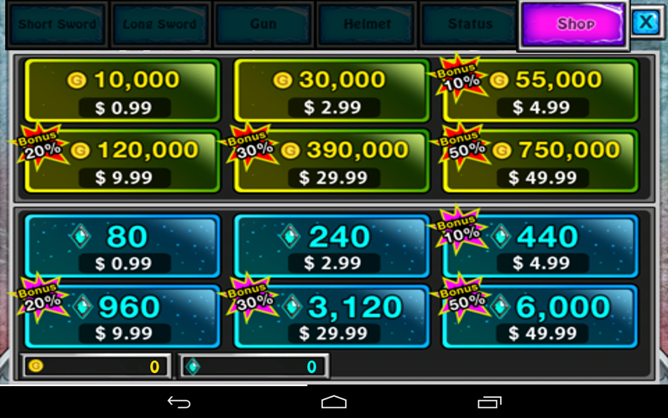 Cartoon Wars: Blade is the logical progression for Gamevil, a company that has been treating mobile gamers like bigger and bigger cash cows. This developer is not the only offender, but it seems to be the worst by far. The strategy must be working - they bring out another handful of games every month, all free, and all packed to the gills with in-app purchases.

Believe it or not, I'm not completely opposed to the fremium model. It's a legitimate way to attract gamers who otherwise wouldn't play a game, because they won't (or can't) spend a few dollars for a new app. But in-app payments and microtransactions are a slippery slope. It's fine if the things you're buying can be legitimately earned by playing the game in a reasonable timeframe, and don't turn the difficulty curve into a roller coaster with a quarter slot at every dip. See the PC version of Team Fortress 2 for a great example of a fremium game done right. 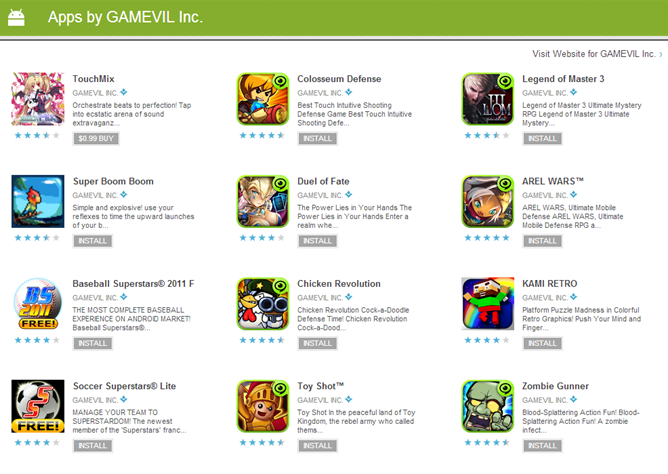 But developers like Gamevil and Glu have abandoned all pretense of pacing, or skill, or even difficulty. Every new game that they publish has the sole purpose of forcing you to spend real money, via insane difficulty, grind-fest gameplay, or both. It's manipulation, pure and simple. Development has shifted from answering the question, "does this change make the game better or worse?" to "does this change make the player more or less likely to give us real money?" This is what has landed EA in hot water for including in-app purchases in a full-price console game.

In case you couldn't tell, we're pretty soured on Gamevil at the moment. This particular game won't be making it into the next roundup. There are better ways to make money with game development, if not quite so lucrative. Release a free demo for the paid game. Put some advertising in - and not just for other manipulative titles. Maybe just exercise some restraint when pushing players towards in-app purchases.