A doctor did this. Before I get any deeper into this story, I want to point out that a person with the prefix "Dr." in front of his name—Dr. Christopher Culligan, a Canadian ER physician and instructor at the University of Toronto Faculty of Medicine, to be precise—is responsible for this mobile app that promises to infer a man's size based on a variety of factors. This criteria includes but is not limited to height, shoe size, butt size and whether the man is gay or straight. Seriously. 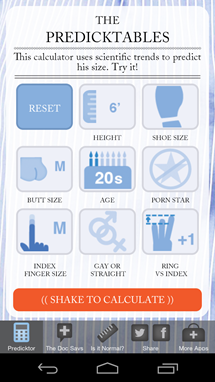 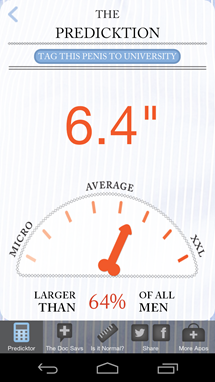 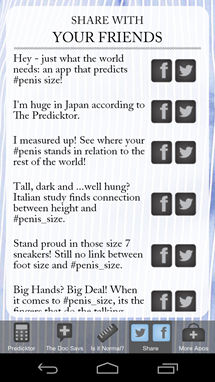 I can't believe I actually get to write these words, but of all the apps I've seen that promise to measure a man's member, this has to be the best. While I'm completely skeptical of its ability to predict with any degree of reliability (I will not be fielding questions as to its accuracy), I'd be lying if I didn't giggle when confronted with "Shake to calculate." In related news, I am twelve years old.

Once you've got your prediction, though, there's even more fun to be had. Entertaining facts from scientific studies, comparisons to populations from other countries. Heck, you can even share with your friends. How delightful! Hey everyone on Twitter! I have some information you might be interested in! There's a huge list of ready-made status to choose from, so have a ball.

The video is even better. Please do yourself a favor and watch it. While there is almost certainly some handy information in there (turns out size might not actually matter!), it is worth two minutes of your time to find out which of the people depicted is huge in Greenland.

This app is only intended for humorous purposes. It also accomplishes its goal. 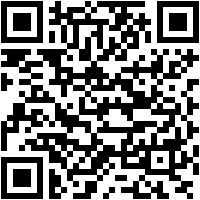 Ultimate conversation starter answers the question: "What's in the package?"

How do you stack up to your friends? Is that a cell phone in your date's pocket? The Predicktor (www.thepredicktor.com) has the answers.

The app's calculator uses only physical attributes proven by scientific research to be associated with penis length and discards all others, like race.

"The Predicktor is an entertaining antidote to the widespread insecurity, anxiety and dissatisfaction among men over their penis size," says Dr. Christopher Culligan , a family physician and CEO of mobile health app developer The Doctor Says.

The new app takes a prickly subject into the open, busts a few myths, and adds a few laughs on the way. To get the conversation going, it offers instant access to the facts. For example:

The Predicktor is available immediately for Android smartphones via www.thedoctorsays.com. A Blackberry version will be available later this week.