A few weeks ago, Motorola started pushing a soak test update for the Atrix 4G to members of its "feedback network." Naturally, everyone ran wild with speculation – could this be Ice Cream Sandwich? Never mind that Motorola had already made it pretty clear that the first dual-core handset would be officially be stuck on Gingerbread until its dying day. We were all hoping that the company had a change of heart. And it made sense – after all, why would they send out a soak test for an incremental update? 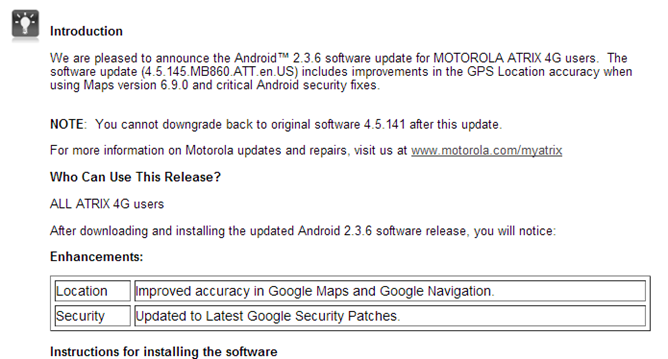 I guess it's just in our nature to root for the underdog. Alas, yet another letdown: what was once a mere soak test, is now an official OTA, and it's nothing more than a small bug fixer. But honestly, as much as we hoped for something more – to see the old dog learn a new trick – we were fooling ourselves. The last thing a company like Motorola is going to do is say "no, this will not be updated" only to turn around several months later and say "oh, you wanted ICS? You got it!" In fact, it usually works the other way around.

But I digress. The update is on its way out now, and it has some GPS- and security-related fixes onboard. At least it's something, I suppose.

[Open Letter] Please Help Yourself To Helping Yourself - Why Google Needs To Rethink The ...