Update 2: 1SaleADay has now decided that its 16GB Nexus 7 was worth $250 originally, as opposed to the $260 'list price' when we posted this story. At least they're getting closer.

Hey, are you the sort of person that likes getting a bad deal disguised as a good deal on the internet? No? Me neither. But 1SaleADay seems to be looking for the poor souls uninformed enough to believe a refurbished 16GB Nexus 7 was worth $260 new (yes, they couldn't even be bothered to say $250), and that this refurb is an absolute steal at just $190. Update: They've since changed it to $180. Still not a good deal. 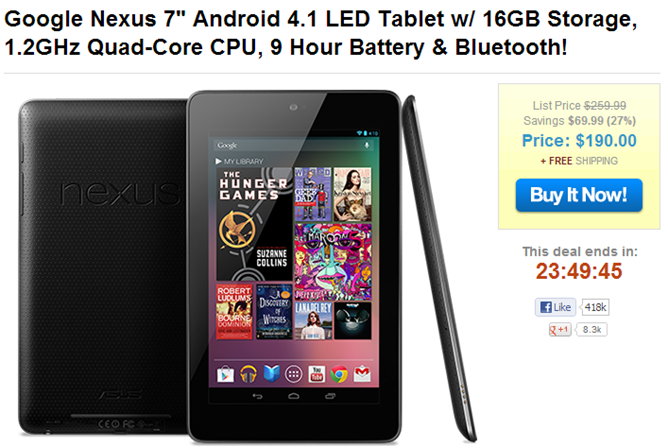 Here's the deal, 1SaleADay: your deal doesn't just suck, it's borderline fraud. You are lying to your potential customers, and not in the "whoops, typo, our bad!" sort of way. You are actively causing them to believe that this product is worth more than it is in order to make your lamentable $20 discount look like a savings of $80. Which is exactly what Groupon did last week.

It doesn't matter that the 16GB Nexus 7 cost $250 six months ago (I still have no idea where they got $260). Maybe legally it might, but hiding behind that defense is lamer than the deal itself. Today, right here, right now, the same exact tablet can be had brand-new on Google Play for just $200. And you're probably well aware of that. But I feel a little bad for all of the people who aren't privy to such knowledge.

Channel 4's 4oD Comes To Android In The UK, Provides You With Your Inbetweeners Fix On The Go