If there's one thing we all know about the latest entries in the Nexus line, it's that they're hard to get a hold of. No one is quite sure why the launch turned out to be a total mess, but all eyes have been on the Play Store since October, waiting to catch the devices in an ephemeral moment of availability.

Following the renewed availability of the Nexus 4 (it's still there, by the way), the Nexus 10 – Samsung's ten-inch contribution to the line – is once again ready for purchase in the US. Both the 16 and 32GB versions are up for grabs. 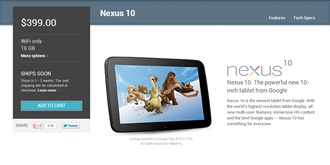 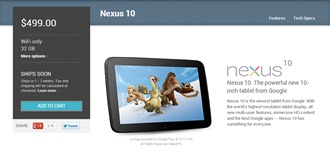 Like the Nexus 4, the Nexus 10 "ships in 1-2 weeks," but - while you can't get the slate immediately - the fact that it's up for purchase still great news.

As for the Play Store's other international outposts? Australia and Germany are both sold out, while the United Kingdom and Canada both have the 16GB model (but not the 32GB version) in stock.

If you're in the U.S. and you've been waiting for your chance to get a hold of the Nexus 10, hit the link below and claim yours.

Sony Launches Pilot Version Of "my Xperia" - A New Way To Find And Remotely Lock Or Wipe Your ...