Update: The CyanogenMod team has chosen a new name: cLock. According to the Google+ post, the new name was chosen by virtue of its simplicity.

In a post to Google+ titled "Pitfalls of being so big" earlier this evening, the CyanogenMod team informed followers that CM had been served with a C&D (Cease and Desist) request regarding their Chronus clock widget.

For those unfamiliar, Chronus is CyanogenMod's acclaimed lock screen (or home screen) clock widget, introduced last December, that displays the time in Android 4.2 fashion along with configurable calendar and weather information.

Specifically, the "entity" serving the C&D seems to have issue with the widget's name, which is similar to the entity's own "Cronus." CyanogenMod's post emphasizes that while the team does not agree with the C&D claim, they do not have the time or resources to fight it so, naturally, they're looking to crowd-source a new name for the clock. 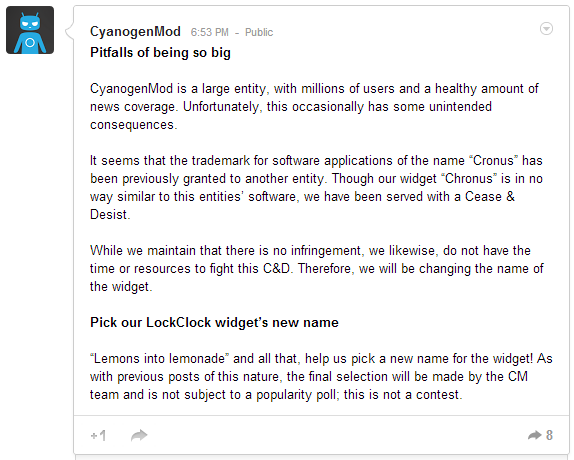 CM's followers have already suggested some pretty great replacement names – highlights include "Clockblocked," "Cease & Desist," and "Not-Cronus". If you've got a good idea for the widget's new name, hit the link below to head to the original post.

Sony Xperia Z Up For Pre-Order On Three UK From £34 A Month On Contract, Available On February ...