There was a day when app developers who chose to work on the Android platform were looked down upon by their more lucrative iOS brethren. Well, those days are drawing to a close. The newest App Annie index of mobile application sales is out, and it's overflowing with interesting data. The takeaway message is that Google Play revenue doubled between the third and fourth quarter of 2012. 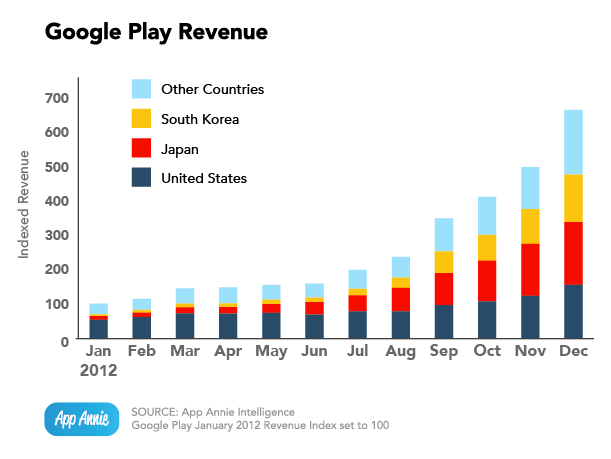 This is, in many ways, the same trope we've seen in other metrics in the past. Android is behind iOS in absolute numbers, but the rate of growth is much higher. While Google Play revenue was growing by 100%, Apple's App Store was up only 20%. Sales of apps and games were up in the US, but much of the growth came from Japan and South Korea. In fact, Japan now accounts for slightly more Google Play revenue than the US does (according to App Annie). South Korea is just a little behind America, as well.

Another fascinating trend in the data shows the degree to which games are fueling the revenue increase. American users spent 76% of their dollars on games, in Japan that number is up to 88%, and in South Korea that figure is a whopping 95%. Part of this has to do with non-game apps being free more often, but we can also say that the best way to make money on Google Play is with a game that appeals to Japanese and South Korean users. 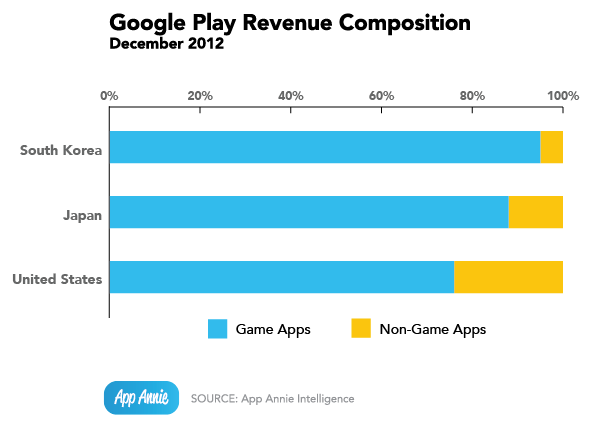 When breaking down the top publishers by revenue in Google Play, the domination of Asian developers is obvious. In the chart below, South Korean and Japanese devs are making the most cash. Some of these developers are probably familiar, but being based in Asia means all their games are going to be released in these booming app markets. Gameloft is the only western developer on the list, and that's probably thanks to its high prices and use of in-app purchases. 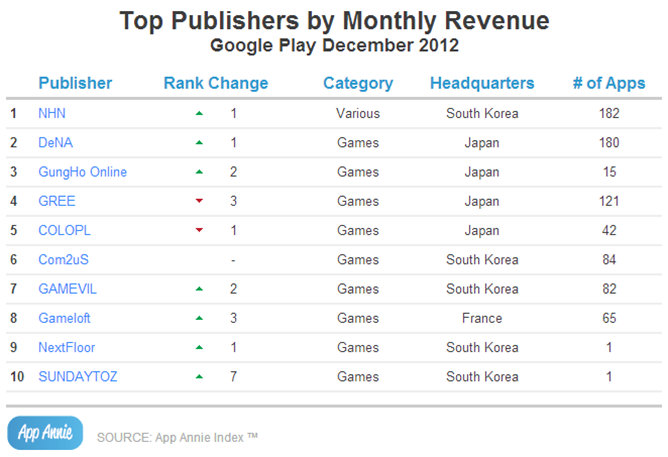 Google Play is really starting to take off following the release of devices like the Nexus 7. Whatever Google is doing, it's working. Solid growth in the US and explosive increases in Asian markets could finally ensure that Android users are taken seriously by all developers.

HTC Vows 'Continued Support For The Developer Community,' But We're Not Convinced

Because No Games Are Better Than Crappy Games: Zeboyd Calls It Quits On Android