Earlier this month, we took a look at famed Android developer Koushik "Koush" Dutta's newest app: Carbon. Having absolutely nothing to do with the heavily belated Twitter app of the same name, this Carbon is a backup tool for apps and app data. So, how's it different than Titanium Backup? It doesn't require root. To put it mildly, this is something that Android users have longed for since, well, always. 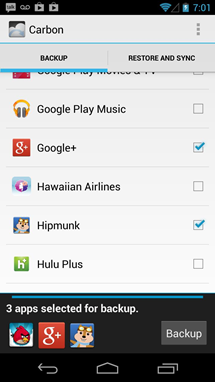 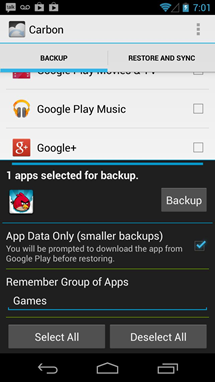 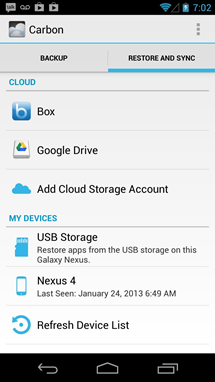 Now, the application has left its beta stages behind and is available in the Play Store in both free and pro variants. The free version will get you full backup/restore to/from SD card and PC (requires your phone's drivers), for both rooted and non-rooted users. For an additional fee of $5, the app also offers an ad-free experience, automatic backups, and – most importantly – cloud backups. With the latter option enabled, Carbon can automatically send your backups to your Dropbox, Box, or Google Drive account. You'll never lose anything again.

As good as this all sounds, there's one pretty big caveat: it doesn't work on Motorola devices. Why? Because "Motorola phones have a bug that break Android's backup mechanism." Let's hope Google can fix that mess in its upcoming Googorolamotooogle phones. Koush notes, however, if you do get it to work on your Moto phone to let him know.

You'll find full instructions on how to get Carbon working with your (non-Motorola) phone in the app's description. Hit the widget below to head there now.