PhoneArena has obtained an image of something that definitely looks like it could be a white Nexus 4. Here's the photo in question. 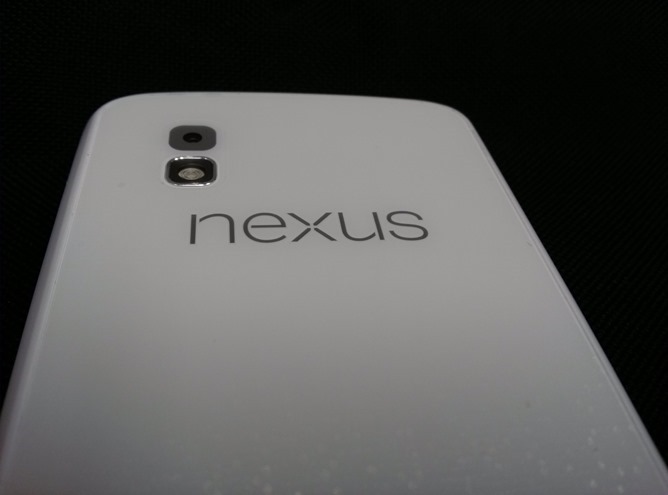 The quality isn't fantastic, but what we're looking at does appear to be a Nexus 4 that's been through a serious bleaching. The reflective pores are still present (see the bottom-right of the photo), and the camera module now appears to have a slightly visible border. This may just be a result of the fact that the white color shows the outline more clearly.

What are our alternative explanations? If this were an amateur paintjob, it'd certainly be a high-quality one, as the 'nexus' text looks perfectly intact. It would also be hard to retain those little reflective bits after they'd been painted over.

As for the possibility of image editing, well, I don't claim to be an expert. A quick look in Fotoforensics and a general perusing  of the pixels didn't yield any anomalies to my eyes, though feel free to correct me on that front.

This picture was taken with a model E975 Optimus G - likely the standard issue 'company phone' for LG's mobile division - though this particular model isn't very common. The E975 is a variant sold primarily in Australia, though it can be found through various online retailers in Asia, as well. Based on that information, I would venture that, most likely, we're looking at a prototype white Nexus 4 taken by someone at LG, or at least the chassis for one.

The thing about prototypes, though, is they don't necessarily portend that a real product is nearing release. Apple fans will recall the debacle of the white iPhone 4, which wasn't available until a whopping 10 months after the black version because of manufacturing difficulties. The white Galaxy Nexus was a fairly rare bird, as well.

So, even if this picture is the real deal (and I'm personally inclined to think it is), this isn't a guarantee of impending release. Then again, given there have been white version of the Nexus S, Galaxy Nexus, and the Nexus 7 (only for I/O attendees, though), it's seeming a lot more likely as of today.