Finally! Since the first SwiftKey Flow beta hit the scene, the inability to "flow" in all texts fields has been driving me crazy. Thank God that's been fixed in the newest beta. Phew. 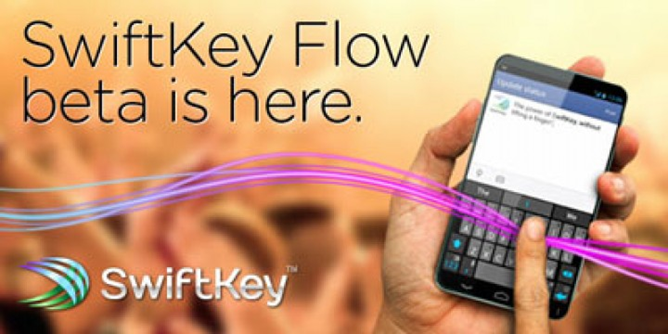 We're likely getting closer to a final release of Flow, so this beta appears to be more about polish and less about features – and that's a good thing. Aside from the ability to Flow anywhere, it also brings easier corrections, new languages, a new theme, and more. Here's a look at the full changelog:

Changes in this version:
* Predictions (and Flow) now on in most places (exceptions: email fields, passwords, anywhere where the app doesn’t behave itself with SK, fields offering their own corrections on Android versions <= 2.2)
* Easier corrections – just tap on the word and SwiftKey will offer you 3 possibilities
* New languages: Thai, Vietnamese, Bosnian, Albanian, Javan, Sundanese (plus those added in 3.1)
* Features from SwiftKey 3.1: Berry theme, split layout in landscape on phones, Armenian, Azerbaijani, Georgian, Hindi, Hinglish, Irish, Macedonian, Spanish (Latin America) and Tagalog
* New layouts for Hindi and Russian
* Ukrainian landscape layout fixed
* Backspacing on to the final word of a multi word prediction (Flow through space)  will now give better alternatives
* Typing style now inferred rather than a setting
* Long press delete accelerates after the first word

Bugs fixed:
* Flowing off shift no longer triggers a change in shift state
* Flow no longer gets stuck when you flow off the bottom of a page
* Quick period working after single letter words
* Arrow key repeats
* Learning when sending messages or tabbing between fields with the enter key fixed
* Azeri capital i behavior corrected
* Estonian will now predict words containing ö
* Fixed force close on Beta predictions
* Flow trace no longer left behind after flowing
* Mounting an SD card will turn predictions off only if SwiftKey language packs are stored on that SD card
* Keyclick sounds no longer doubled
* Haptic duration made consistent with flow on and off

Woo, that's a big'un. The public beta is free for all to try – you grab both phone and tablet versions from here.