Innovation is great. You know what it does? It solves problems. Not problems like 'What is beauty?' because that would fall within the purview of your conundrums of philosophy. Innovation solves practical problems. For instance, "How am I going to stop this big mean 5" 1080p display from tearing my battery and hand a structurally superfluous new behind?" The answer, according to HTC? Use a mini phone.

Let's give HTC at least one paragraph of fairness: the secondary mini-phone doesn't sound like the worst idea once you hear what it can do. It can take Bluetooth calls, pair via NFC, display notifications, act as a remote when your phone is plugged into your TV, and even help find your phone if, for some reason, you lose the big one but still have the little one in your pocket. For as silly as the concept sounds, they at least packed it with features. The remote control alone makes it seem kinda worthwhile. 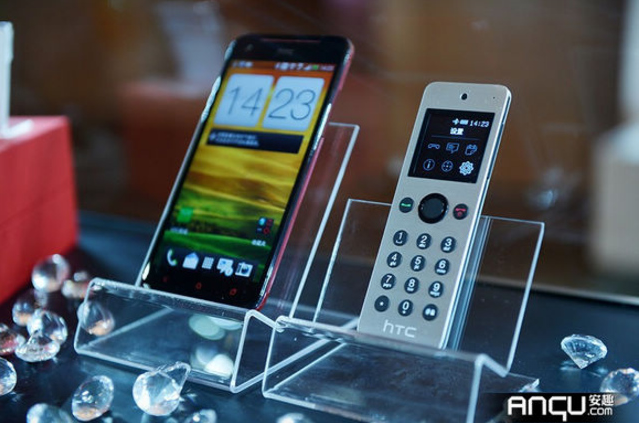 Okay, fairness over. I think this is a great idea. Think about it. We've been looking for ways to stop using our giant phones for so long. People create smartwatches so you can check your notifications without touching your phone, and one of our favorite things from CES was literally a feature that allows you to use your handset's main, full color, high-resolution display less. Adding a second e-ink screen instead of shooting for better battery life is the future of handset technology.

However, who likes watches? No one, that's who. Watches suck. Putting a second screen on your phone is good, but putting that display on a separate device altogether is even better because it can have it's own dedicated battery. A battery you have to keep charged. And, really, what is the single most popular form factor for high-tech gadgetry right now? It's a phone. So if we're looking at accessories that let you use your phone less, the sensible choice is a phone, right?

My one criticism is that this secondary phone could do with something a bit more powerful than just a Bluetooth radio. Maybe put WiFi or a 3G/4G chip in it. And while you're at it, make the display a little bigger. Who can read those tiny little screens? Also, why have buttons at all? Physical buttons are wasted space. Just make the entire thing one big LCD panel. You can change the button configurations with software. Hey, that gives me an idea. Why not allow developers to write small applications or "apps" for this phone? That would make it even more powerful.

Honestly, I foresee a day when these secondary phones will be so powerful you won't even need to carry around your phone. It's convergence at its finest. If you need me, I'll be setting up my Kickstarter for this idea. Polarbit Releases 'Cracking Sands', A Cartoon Racer With Guns, Lasers, And Other Destructive ...