Well, it's a start. While the Skype app for Android still has a bizarre and uncomfortable habit of forcing landscape mode, today's update at least allows users to use the portrait orientation if they're making a call. That's nice. Especially since the positioning of front-facing cameras on devices like the Nexus 7 make landscape video chats extremely awkward. Now if only we could get this for the rest of the interface, that would be great. 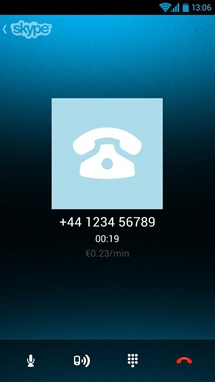 This isn't just for phones anymore!

Additionally, today's update brings a few bug fixes and support for Portuguese, Norwegian and English of the UK variety. Not a bad update. However, Skype, can we please see this portrait thing expanded to the entire app? It boggles my mind that prior to the tablet UI, it was possible to IM people in portrait mode and it looked kinda decent, but after the overhaul, it's more cumbersome to use it on a Nexus 7.

Amiigo Fitness Bracelet For Android Tracks Your Workout Automatically, Lets You Tell Your ...

HTC Forces Owner Of HTCRUU.com To Shut Down, Hand Over The ROMs (And Domain)