While those in the land down under can already purchase a Nexus 4 from the Play Store, like every other market, handsets are in decidedly short supply. However, LG is now saying that it will be shipping some devices to Harvey Norman, available starting February 1st. The catch? Buying one outright will cost you 496 AUD. 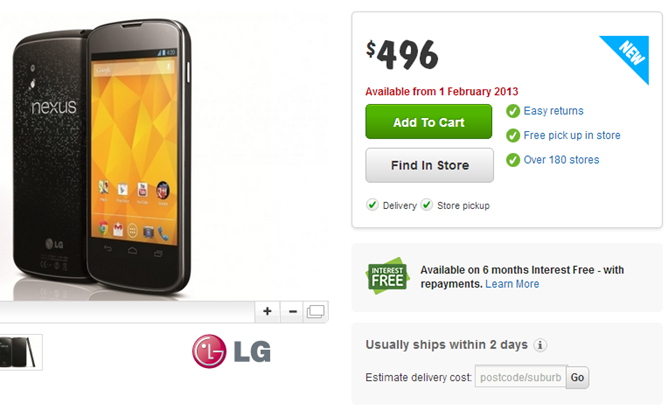 There is an alternative, though. "Select" HN stores will be offering the Nexus 4 with an Optus plan (see site here). Again, that's only an option in-store, beginning February 1st. The lowest tariff you'll be able to get away with without having to pay a handset repayment fee is the 60 AUD tier. Anything lower will tack on a hardware fee in addition to the cost of service.

You can pre-order an unlocked Nexus 4 from HN now (link), and it should ship come February 1st.

SYDNEY, January 24, 2013 – LG Electronics (LG) has announced that the widely anticipated Nexus 4 will be exclusively available through Harvey Norman stores on Optus mobile plans from February 1.

A design collaboration between LG and Google, the LG Nexus 4 was officially launched on Google Play in November 2012, and quickly proved to be a hit after selling out within 20 minutes.

Global demand for the smartphone continues to grow, and offering the handset in Australian stores now will give sales another boost.

The Nexus 4 brings together LG’s advanced hardware design, including Qualcomm’s cutting-edge Snapdragon™ S4 Pro processor, for speed and power.  Featuring 2GB of RAM and the latest version of Android® (Jelly Bean), the Nexus 4 is the snappiest Nexus smartphone to date.

“The Nexus 4 is a great example of how LG’s state of the art hardware is innovating in the smartphone market with Google choosing to be its latest hardware partner,” said Lambro Skropidis, General Marketing Manager at LG Australia.

“The response in Australia has been overwhelmingly positive on Google Play already, and we know our Harvey Norman partnership will create even greater demand.”

Stock will be available for an outright purchase of $496 in all Harvey Norman stores and on an Optus plan in selected stores. Pricing will be dependent on the customer’s choice of Optus plan; details of the suggested plans and pricing can be found in store and online atwww.harveynorman.com.au.

Customers can pre-order now for stock available on the 1st February.

[New Game] Old School Defense Is The Best Tower Defense Game Based On A Will Ferrell Movie ...