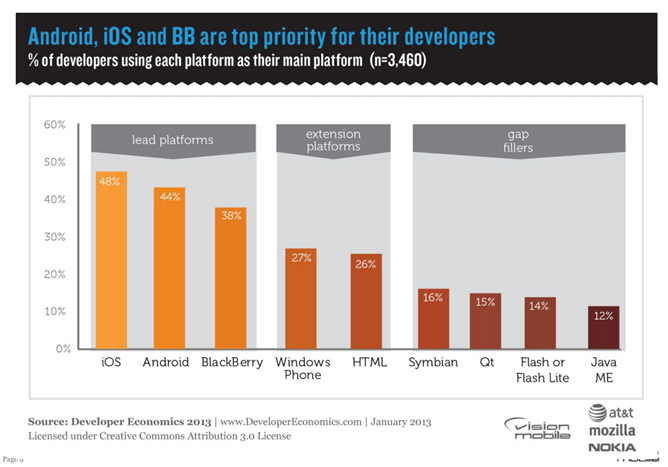 Above is the graph of OSes that developers list as their "main" platform. That is not to say that any of them code exclusively for them, just that it is the primary target for attention. Very surprisingly, Blackberry lands in the number three spot behind Android, just six points below. Which is crazy given that Android itself is only four points below iOS. Windows Phone is in a distant fourth with only 27%, eleven points behind BB.

Couple that with the intention of developers to write for Windows Phone (47%) and BB10 (15%) and you get the sense that a third platform could really stand a chance. Let's face it, the old Blackberry is on its way out and BB10 is RIM's last ditch effort to stay in this game. Whether it will succeed or not is yet to be seen, but one way or another there is plenty of room in the race for a third horse. If anyone asks you if programmers really want to support three entirely separate OSes, the answer looks to be 'Yes.' 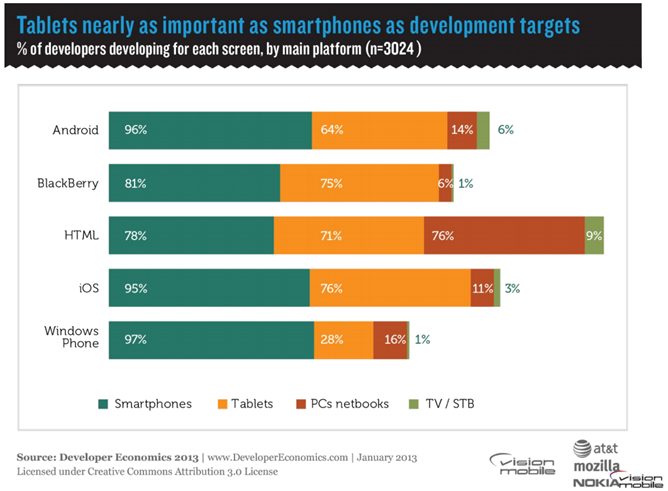 Oh, and as if that wasn't enough, developers aren't just keen on working on multiple platforms, they're also gaining awareness and enthusiasm for tablets. According to the report, 96% of Android devs write for phones, and 64% for tablets as well. This compares rather nicely to the iOS split which has 95% for phones and 76% for tablets. We still have a ways to go, but given what the app landscape was like when the Xoom and original Galaxy Tab 10.1 ruled the space, this is a hugely comforting notion. 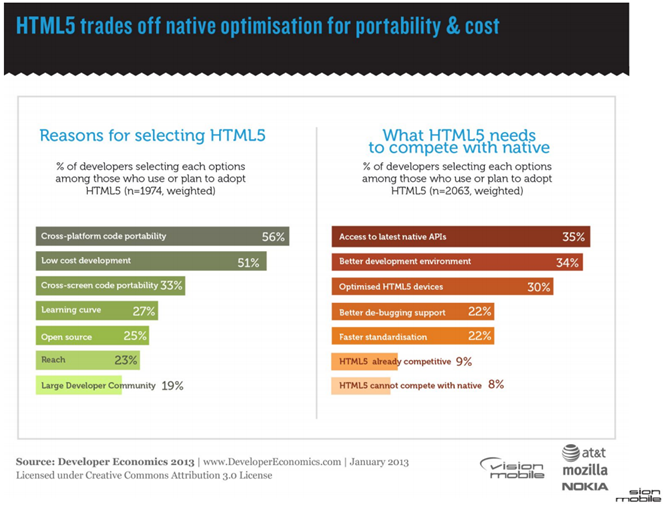 If there's one platform that isn't doing so hot, though, it's HTML5. While it certainly gets plenty of attention, (50% of devs use HTML5 vs 56% iOS and 72% Android), there were a lot of major criticisms on how it can improve, including getting access to the latest APIs, a better coding environment and devices that are built to fully take advantage of the platform.

There is a lot about HTML5 that developers want to take seriously—not the least of which is code portability—but unfortunately, the state of the platform is that while people want to use it, it's just not there yet. See also: Facebook's old app.

Oh, and one other thing. If you're not submitting apps to Android or iOS, you're missing out. The report reflects that developers that do not develop for one of the two generate about half the revenue of those that do. We can bicker and argue 'til day's end about which OS makes more money, but for the moment it's better within the two towers than it is without. Which is more than can be said for Frodo. Poor GPS-less sap.

The entire report is out now and definitely worth a read if you're trying to decide which platform to develop for, or just curious about what the app universe is like these days.

The Nexus 4 Is Back In Stock Online At T-Mobile.com (For Now)

Hushed Launches Android App, Allows You To Get Anonymous, Disposable Phone Numbers In Many Countries