Verizon, out of all four of America's major carriers, is notorious for keeping the subsidized price points of its devices high long after release. Even 3rd party retailers seem affected by this trend, and, as such, we've not seen Verizon's Note II dip into real "deal" territory since its debut late last year.

In all likelihood, that's simply because of demand. Verizon's coverage and network sell handsets, and Big Red remains (if only marginally) the largest mobile network in the US. Because of its ongoing DROID marketing campaign, it seems pretty likely Verizon sells more Android-powered handsets than any other carrier, too. As much as we love to give Verizon guff over bootloaders and data caps, they've probably done more than any carrier in the US to propel Android into the mainstream.

Anyway, back to the Verizon Note II. It's on sale - $199 for new subscribers and upgrades. The best price we've seen to date, bar-none. 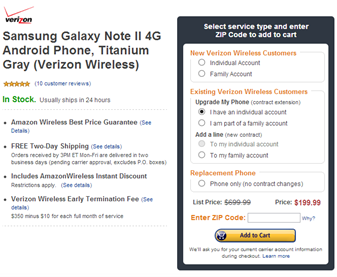 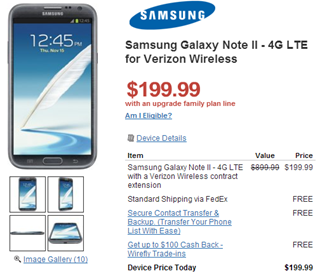 You can find this deal at Amazon Wireless or Wirefly, though of the two, only Amazon has the white version of the Note II in stock at the time of this writing.

NASCAR Mobile '13 Screeches Into The Play Store, Covered In Engine Grease And Logos