Here at Android Police, we're kind-of-sort-of all about Dropbox when it comes to our cloud storage needs. It's easy to get free space, the desktop and Android clients are both pretty great, and the service itself has generally been bulletproof-reliable. And for us, Dropbox is less about storing things in the cloud, and more about providing easy access to files wherever we go.

Carbonite's Currents works off the accessibility mentality - it's not how much you can store, but what you want to have within arm's reach at a given moment. So, Currents doesn't have storage limits, it has recent-ness limits.

Install the Currents app on your Windows or Mac computer, and it will automatically monitor your desktop and common personal folders for certain generic kinds of files you select (documents, images, videos, music). If you want to monitor folders outside the common user storage area, you can manually add locations to watch.

Unlike Dropbox, though, monitoring a folder like the desktop doesn't mean you're going to have a bunch of crap you don't want getting synced across devices (shortcuts, folders, exe files, etc). Currents will only sync files of the type it defines under the aforementioned list (docs, pics, videos, music). This is both a a blessing and a curse. If you really want to sync a ZIP file, for example, you're SOL - Currents won't do that.

Of the kinds of files it will monitor, only those files which have been created or modified on any of your devices with Currents in the last 30 days will be synced. If a file goes past the 30 day expiration period, it exits the Currents list (Currents does not have folders) and will no longer be available for remote access. 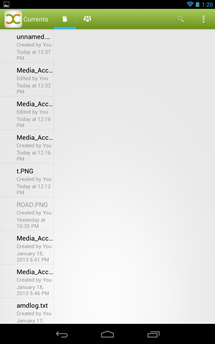 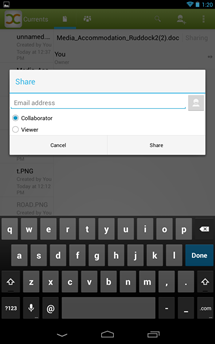 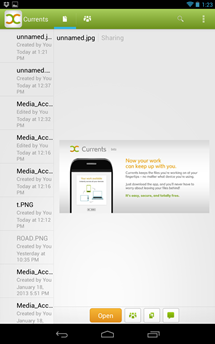 You may already be thinking "What kind of stupid load of bull is that - this is so limited!" But then I'd tell you that Currents is A.) free (with no stated storage limit), and B.) does something that really is unique. Edit a file on your desktop, see it a moment later on your phone or laptop (at the top of the Currents list), edit it on your phone, and see the changes sync back to the local file and the cloud, whether it's on your desktop, in My Documents, or a folder you've selected. There's no need for moving things around in folders, and there's even a version history with the ability to revert files to older revisions. You can do all kinds of sharing stuff, too, though everyone needs to be using Currents.

So, does it work? The Android app, unfortunately, stills seems to need a lot of attention. I was trying to save edits to a doc file in OfficePro HD, and while it worked the first time, I tried it again when I had that same file open on the desktop. It never ended up syncing the changes, and instead made a new file with (2) appended to the end of the file name. Then I tried deleting the original file, and that change didn't sync down to the Android app, which still showed the original. Tapping it did nothing. Then I couldn't open the new file with the appended name. Then the app's UI went blank. Then it crashed. Now the modified file won't open, and after restoring the original, the app just crashes whenever I try to open it.

My recommendation would be to take these early bugs with a grain of salt, though, as they'll likely be ironed out in future releases. But it's probably best to wait for said future releases before throwing any of your eggs into the Currents basket. And fix that tablet UI, guys. Geez.

You can get the Currents Android app on the Play Store.