I have a confession to make: I haven't been using my Nexus 7 that much over the past few weeks. Why? Because it has been suffering from horrible lag. Everything was peachy keen up until the Android 4.2.1 update, but that's a different story for a different day. For now, the lag is the important bit.

LagFix is for rooted devices only.

Then we stumbled across a new app called LagFix, which – get this – fixes lag issues on many devices, like the Galaxy Nexus, Nexus 7, Nexus 4, One X+, and more. Of course, the lag thing is a common issue, and is likely caused by a "well-known TRIM bug," which basically means that storage is "not properly TRIMmed when needed." So that's what this app does. But the technicalities here aren't really what's important to you, are they? You just want to know if it works.

Update: The author of LagFix has posted an in-depth FAQ that covers how the app works, what it does, et cetera. You can find that here. 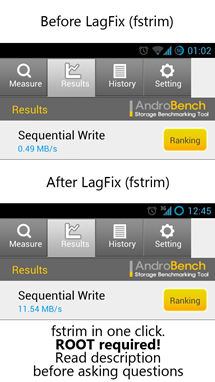 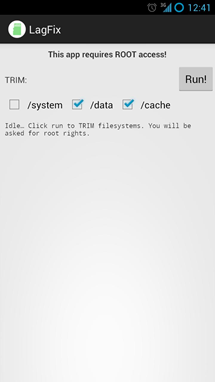 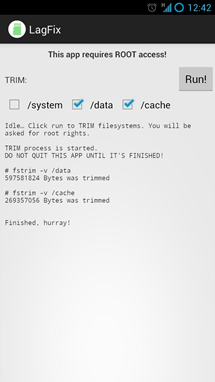 Well, after using it on my Nexus 7, I'm inclined to say that it makes good on its promise to end lag. After running LagFix and rebooting my device, I noticed an improvement immediately – I no longer have to wait 20 seconds for the display to turn on after hitting the power button, for the screen to rotate, or pretty much anything else that previously took what seemed like forever.

So, in a nutshell, LagFix delivers on its promise to, um, fix lag. It's free in the Play Store, so if you're rooted, there's no reason not to give it a shot.

Stargate Command Updated To Expand Compatibility, Still Has Annoying In-App Purchase For The ...