Up until this point, if you wanted to get the 3G version of the Nexus 7 in the US, it appeared that AT&T was the only option. Now, however, Google has provided a T-Mobile version on the Play Store. This model comes pre-loaded with a T-Mo SIM. According to the tech specs, though, they're functionally identical. This will just save you the trouble if you prefer magenta over blue and orange, I suppose. 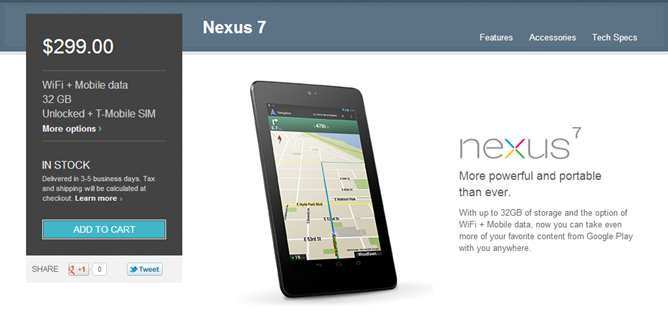 The price is exactly the same and even the radio bands are identical, so regardless of which unit you buy, you should be getting the same hardware. Except the SIM, of course. However, only AT&T offers the $100 subsidy if you buy with a contract. After all, T-Mobile allegedly isn't a fan of those subsidies, remember?

We've reached out Google to confirm that this model really will be the same hardware, as opposed to an HSPA+ 42 radio (which T-Mobile supports, but AT&T does not). We'll update this post when we hear back.

We've heard back from Google:

I can confirm the Nexus 7 TMO Sim in the Google Play store is HSPA+21.

There you have it. Functionally no different than the AT&T version. Only dissimilarity is what comes in the SIM slot.

T-Mobile Set To Launch LTE Network Within Days In Las Vegas, To Be Followed Soon By Kansas City