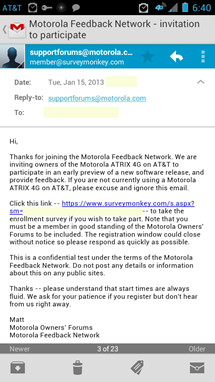 A tipster has sent in the above screenshot announcing the program, and a thread on XDA corroborates the story. Given that Motorola hasn't been able to keep its ICS in its pocket (which is a horrible place for an ice cream sandwich, by the way), we expect this soak test will bring Android 4.0 to the handset. Which will at least bring it up to par with late 2011. Assuming everything goes well, we can assume the update will reach the rest of the users in short order.

So, is anyone else part of the soak test? How does it look?

Synology Releases DS Cloud, Lets You Sync Files From Your NAS For Offline Viewing On Your ...