If you're the lucky (debatable) owner of a Verizon Galaxy Tab 7.7 or LG Lucid, good news - you're about to get an OTA update! Verizon just posted new update docs on its support site for both devices. 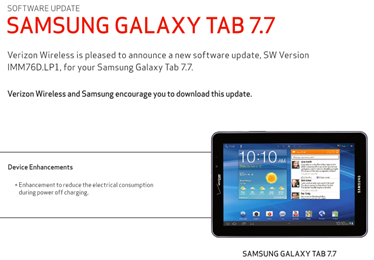 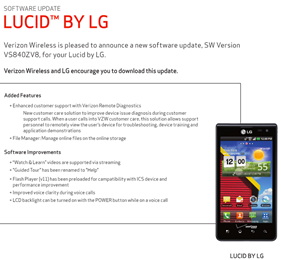 The Tab 7.7's update is about as minor as you can get, though, offering reduced electrical consumption when charging... while powered off. We're guessing that's not what this update is actually about though. The Tab 7.7 was one of a handful of American devices affected by the Samsung Exynos kernel exploit (it runs an Exynos 4210 chipset), and my money's on this update (build LP1) addressing that issue. Verizon's probably just being a little sneaky about it.

The Lucid's changelog is more extensive, adding support for Verizon's remote diagnostics, and a new file manager app. Curiously, Verizon has pre-loaded Adobe Flash Player onto the Lucid. My guess is that this is in response to customer complaints about it disappearing from the Play Store, though Verizon's obviously just kind of dragging out the inevitable on that one - people will have to give it up eventually. Here's the full log for software version ZV8:

As usual with Verizon, expect these updates to start rolling out any time in the next couple of weeks.

Now There Is A T-Mobile Version Of The 3G Nexus 7 In The Play Store, But It's Pretty Much ...