If you've even dabbled in the Android mod scene, you know Koushik "Koush" Dutta. He's the chap who made ClockworkMod recovery and several other handy tools for advanced users. His latest app is Carbon, which may or may not be sarcastically named after the famously postponed Twitter app. (The app icon is a trollface - we'll leave the interpretation up to you.) The function is simple: back up both your local APKs and their associated app data. 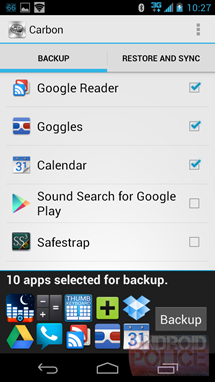 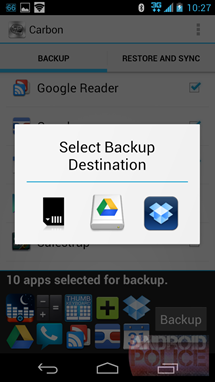 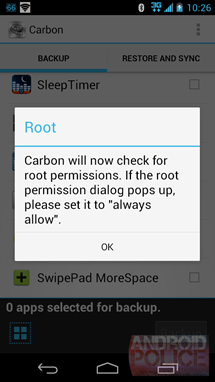 You can select which apps to back up, then choose their destination: Google Drive, your local SD card, or even a connected PC. The latter can encrypt your files as well. Once installed on a new (or just different) Android device, Carbon can retrieve backups and settings from the same locations. Dropbox backup and retrieval is visible, but not implemented at the moment.

Carbon is in beta at the moment, and it seems like it's a ways off from completion. After some quick tests on my phone, there seemed to be issues with encrypted PC backups and a slow restore function. But with Koush's dedication to excellence, there's no reason to believe that these issues won't be ironed out for the full release, which will almost certainly be published on the Play Store. The beta APK can be downloaded from the Google+ link below. This version lasts for one week and requires root access, but the final version will not.

Tapatalk HD Leaves Beta, Is On One-Day Only Sale For $0.99 In The Play Store