So, the idea of an Android-powered camera with a swappable lens intrigues you, yes? Well, last night we got a chance to play with such a device, the Polaroid iM1836... and moral of the story: execution, execution, execution. Polaroid, we think, got it wrong. While we were playing with a pre-production model, I can't help but feel Polaroid took a half-decent idea and managed to totally flub it. First, the video.

Even after a few short minutes with the iM1836, we were able to assemble a formidable list of problems with the device. First, the actual image sensor for the camera is located inside the lens. As you may know, pretty much all cameras have the sensor inside the body - that's kind of the point of having swappable lenses in the first place. Just change the glass, and you're good to go. With Polaroid's solution, you'd have to buy (almost definitely) a Polaroid lens with a built-in sensor. And that sounds expensive. Why have more than one sensor for a single camera? Polaroid's argument is that most consumers are lazy (OK, I'm on board with that) and they'll get the sensor dirty by not covering the body properly when the lens is detached. Maybe there's some logic to this idea, but I know we aren't the only ones who have questioned it. 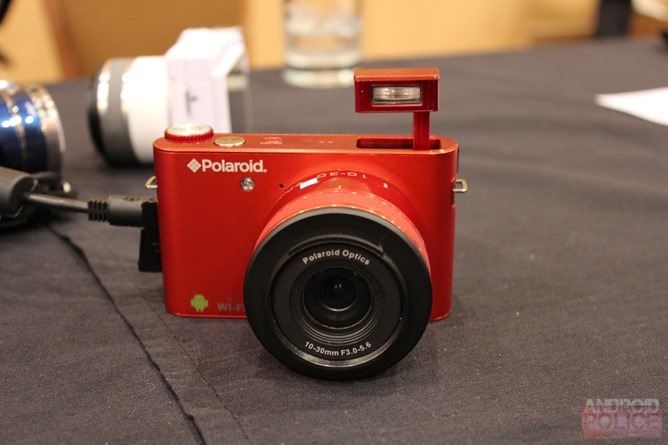 Next, the software. Now, this is a pre-production model. I always try to remember that, and temper my sluggishness-rancor in these situations. But the slowness wasn't the issue - the camera app didn't work. Oh boy. The Polaroid PR person told us the camera had been pretty "beat up" throughout the day, but come on - at least make sure your demo unit is functional in the way people are actually going to want to test. We'll take another look at it on the show floor and see if things have improved.

The quality of the housing seems questionable, too - I had to stab at the on/off button maybe three to five times every single time I wanted to turn the display on or off. And the whole thing just felt sort of cheap - which is exactly what you don't want a still-relatively-pricey consumer camera to feel like.

Jelly Bean (Android 4.1) Now Rolling Out To The HTC One X On Rogers