In quite an interesting turn of events, at its CES press conference, Sony has laid its wares bare on the show floor: the Xperia Z and ZL are there for all to gawk at. Unfortunately, we aren't allowed to go hands-on yet, but we figured we'd tide you over with some photos before we actually get to the touch-feely part. The Z has been announced officially, as well. 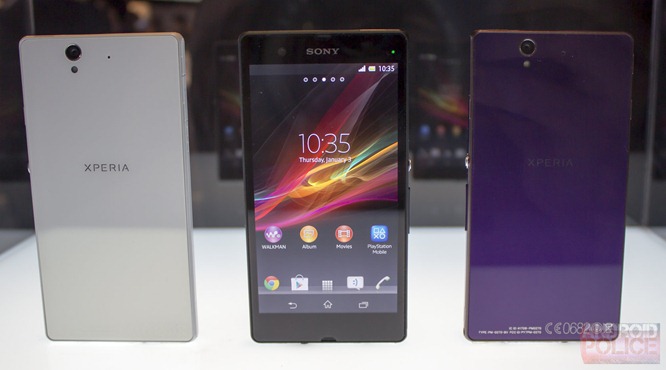 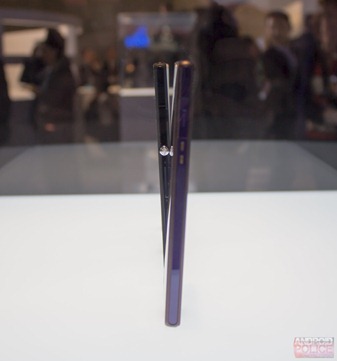 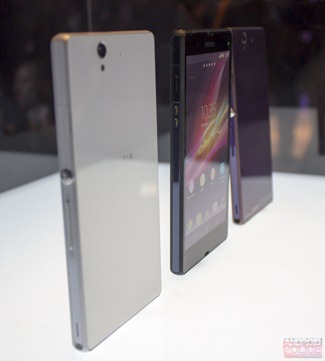 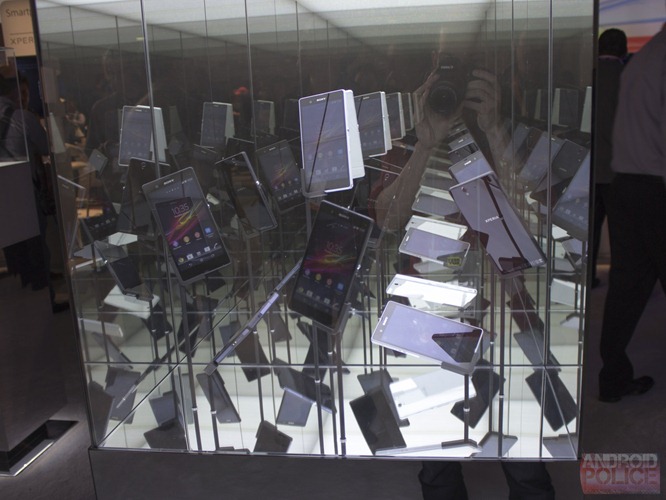 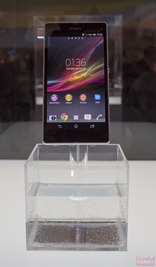 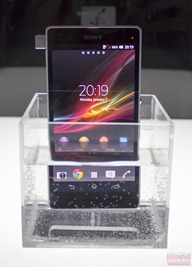 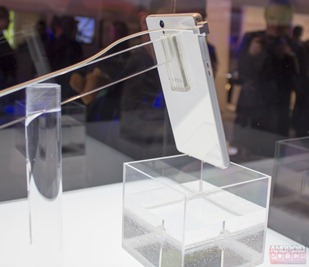 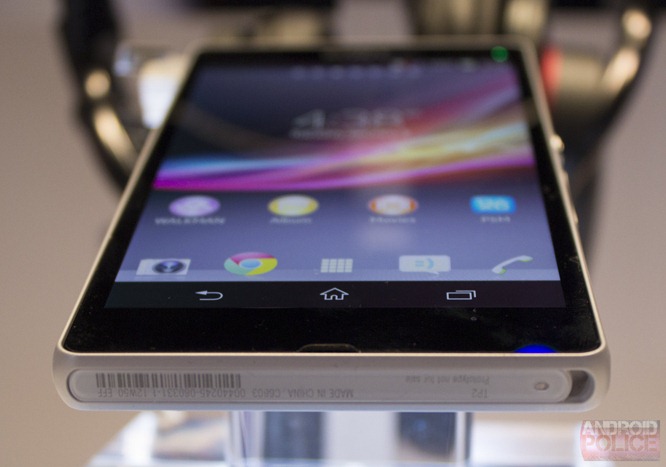 The Xperia Z comes in multiple colors, and is water resistant. In fact, Sony has set up mechanical 'dunk tanks' that allow you to submerge half the phone in water for a few seconds at a time, with the display on (Sony claims it can stand up to one meter of submersion). Both of the dunk phones seem to be running strong after probably hundreds of dips in the wet stuff. The Z has a glass rear cover, and a rather unique circular side-mounted power button, along with a hardware camera button. It also has a microSD card slot, and is generally just gorgeous (though Sony's dated UI sort of detracts from the beauty.) The display is the rumored 5" 1080p, though we aren't certain. The rear shooter is a 13MP Exmore RS sensor of an all-new design, with "video HDR" mode (fancy). The Z runs Android 4.1.2, and packs a 2330mAh battery. The worst part? The release date: March, at the earliest, with retail availability starting in Q2. The whole show is powered by a quad-core Snapdragon Pro processor. And yep, NFC's there too. 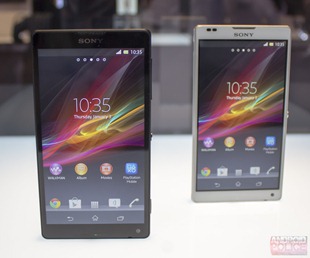 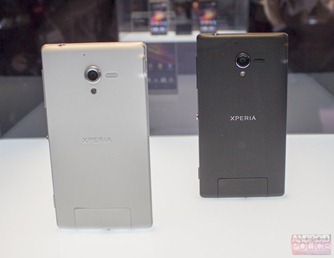 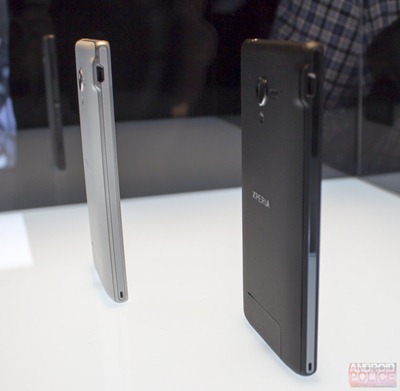 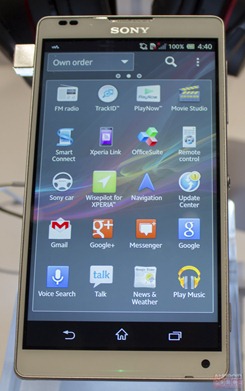 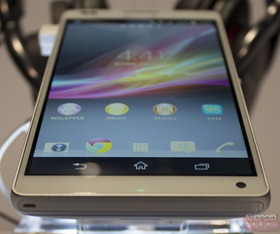 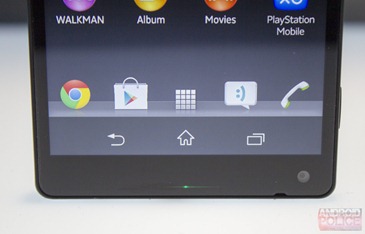 The Xperia ZL is very similar to the Z, though the back of the phone is styled differently, in a matte finish rather than the high-gloss of the Z. The ZL also has a rather large metallic ring around its rear camera lens, which I can't say I'm in love with. Still, it's a pretty phone, and we're looking forward to the impending spec sheet unveil during the press conference. The ZL is a little smaller than the Z, as well, which would sync up with the now-confirmed rumors of a 5" display. The ZL does have a microSD slot, but not its larger sibling's water-resistance credentials.

We'll be bringing you more about the Z and ZL (eg, hands-on) later this evening.

Introducing Xperia™ Z - The Best of Sony in a Premium Smartphone

"With Xperia Z, we are bringing over half a century of innovation in TV, imaging, music, film and gaming to create a superphone experience that truly stands out," said Kuni Suzuki, President and CEO, at Sony Mobile Communications. "With great specifications, Sony's media applications One-touch functions and outstanding battery life, Xperia Z is well positioned for leadership in the smartphone market. By putting smartphones at the heart of our strategy, Sony is enabling people to create, enjoy and share content and experiences like never before."

Xperia Z also includes Battery STAMINA Mode that can improve the standby time by four times or more*by automatically shutting down battery-draining apps whenever the screen is off and starting them up again when the screen is back on.

Sony media applications offer a consistent entertainment experience across a range of Sony devices. Pre-loaded on Xperia Z, the "WALKMAN", Album and Movies apps, enable discovery of on-line and off-line content through a single access point with new ways to enjoy and share that content. The "WALKMAN" application provides access to all your downloaded music, a library of 18 million songs to explore from Music Unlimited and Facebook social integration. The Movies application gives consumers access to over 100,000 movies and TV series from Video Unlimited while the Album application enables easy access to Facebook friends' photos as well as browsing photos by location.**

One-touch functions enable consumers to easily share music, photos and videos from their smartphone to an array of NFC-enabled Sony devices, including speakers, headphones and now TVs. With the new BRAVIA TV, also announced today, simply touch Xperia Z to the remote control of the TV to instantly enjoy your photos and videos on the big screen.

Precision engineered with premium materials, Xperia Z introduces a unique OmniBalance design with subtly rounded edges and smooth reflective surfaces on all sides. Despite its slim 7.9mm body, Xperia Z is highly durable with tempered glass and anti-shatter film on the front and back, as well as the highest levels of dust and water resistance*** (IP55 and IP57) found in a premium smartphone.

In selected markets, a design variant of Xperia Z - Xperia ZL - will also be released in Q1 2013. Xperia ZL delivers the same immersive entertainment experiences as Xperia Z but in a smaller form factor.

Xperia Z and Xperia ZL will launch on Android 4.1 (Jelly Bean) and will be upgraded to 4.2 shortly after launch for the latest Android user experience.

* Based on testing done with default settings, default accounts and applications for Skype™ and Twitter downloaded to the phone. The more applications installed, the bigger the effect of Battery STAMINA Mode.