I went to LG's CES press conference, so I kind of feel obligated to write about it, even though nothing much happened. The biggest news out of the conference is that the translated "Google TV 3.0" press release we came across a few weeks ago is bogus. At the time we thought it meant a new version of GTV was coming, but it turns out it's just the same software that's been out since November, with a new launcher made by LG, which they referred to as their "3rd generation skin."

So what's new about the 3rd Gen skin? Almost nothing. There's a new home screen, although we've already seen it in the "3.0" press release. It looks like this. 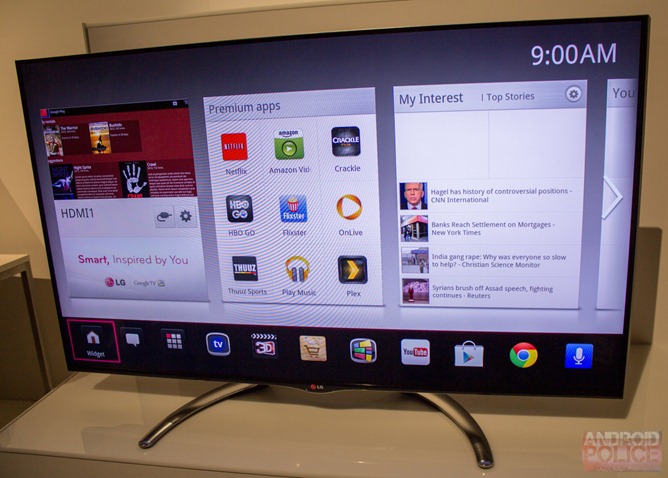 It works exactly as you'd expect - you can arrow-key through the options or use the mouse on the remote. There wasn't much else to show because it wasn't hooked up to the internet. It's nice looking, and seems to be well laid out, but this is the only thing LG has changed. Go one screen in any direction and you are booted to the standard black and blue GTV interface. 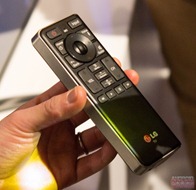 The remote is "new," although it looks like nearly every other GTV remote in existence. The front is a regular remote; the back is a keyboard. The one new feature is a microphone, so you can now do the Voice Search stuff Google Added back in November directly from the remote.

We were hoping to hear about an Optimus G sequel. Their press release teaser video spent a good amount of time showing light glinting off a cloaked, black, phone-shaped object, and when you do that, people tend to expect a new phone. Instead, they spent most of the presentation talking about washers, dryers, and refrigerators which were already released ("We shaved 20 minutes off the drying time [pause for crickets]"), phones that were already released (the Nexus 4 and Optimus G), and 4K TVs (more like $40k TVs). There wasn't much in the way of Android-related news. Oh well, on to the next thing!

[CES 2013] NVIDIA Shows Off Madfinger's Dead Trigger 2 For The Tegra 4, Complete With Godzombie ...