For better or worse, five inches seems to be the new target for flagship Android devices. Huawei is bringing its game to CES (unlike most manufacturers that are holding back for Mobile World Congress) with the Ascend D2, a new Jelly Bean 4.1 device sporting a 5-inch 1080p LCD panel and the in-house K3V2 1.5 GHz quad-core CPU. Other highlights include a 13MP camera (narrowly beating out Alcatel's One Touch Idol Ultra) and respectable 9.9mm waist. Stylistically, it looks a lot like a beefed-up Galaxy S II, minus the physical navigation buttons. 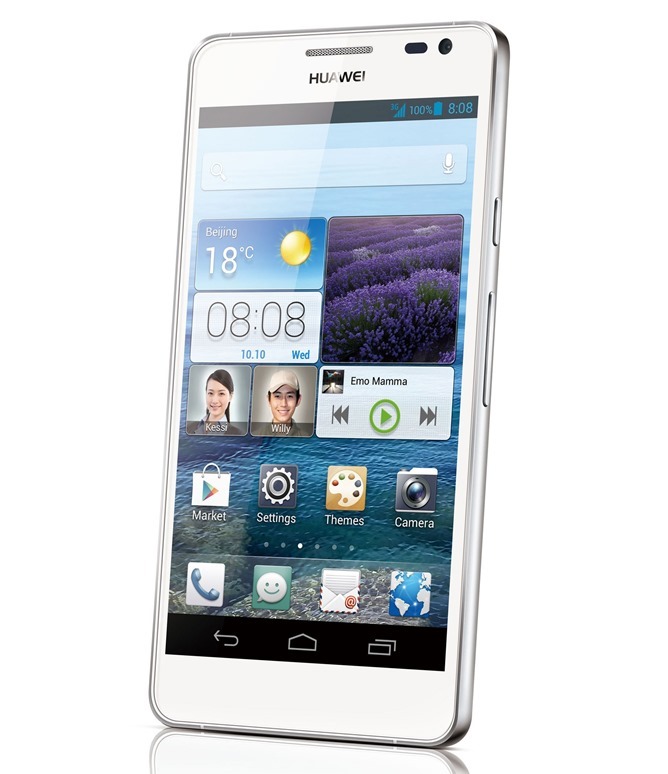 Perhaps most importantly for power users, the Ascend D2 comes packed with a massive 3,000mAh battery, sliding in just below the Galaxy Note II in total capacity. Huawei claims that its ADRX (Automated Discontinuous Reception) battery technology will allow the D2 to charge in 30% less time and last six days on standby. Other notable specs include Gorilla Glass, an aluminum back cover, and white and blue color options. Android 4.1 looks like it's mostly undamaged, though Huawei couldn't resist putting a few custom icons in there.

Expect the Ascend D2 to launch in China later this month, with a Japanese rollout (and hopefully a worldwide launch) following. A smaller model, currently unseen and unnamed, will be released with a 4.7" screen option. Pricing information is not available at present.

"The HUAWEI Ascend D2 has the style, power and all-round performance capabilities you would expect from a HUAWEI Ascend smartphone, but with a revolutionary FHD screen, unsurpassed camera quality and power saving technology to maximize your enjoyment," said Richard Yu, CEO, Huawei Consumer Business Group. "We are excited to introduce the HUAWEI Ascend D2, the latest addition to our series of Ascend range of smartphones, as we continue to put great technology into the hands of more people around the world."

The HUAWEI Ascend D2 has a 5-inch Super Retina fast response IPS panel display and a resolution of up to 1920 x 1080, perfect for full HD 1080 video playback. With its 443 PPI, the Ascend D2 provides unprecedented color accuracy and clarity. Protected by the anti-scratch Corning® Gorilla® glass, and the dust and water resistant IPX 5/4, the Ascend D2 is tough enough to withstand everyday use.

HUAWEI Ascend D2's 3000mAh battery is optimized by Huawei's QPC and ADRX smart power-saving technology. Leveraging Huawei's more than 20 years of telecommunications know-how, QPC technology lowers battery consumption by automatically turning off the transmitter circuit when data transmission is not in use. Its ADRX technology identifies and automatically adjusts the DRX cycle based on the network status, reducing power consumption during standby mode by over 20 percent. In addition, Huawei's proprietary fast battery charging technology enables the HUAWEI Ascend D2 to be fully charged in 30 percent less time than its takes other smartphones under the same electricity conditions.

The HUAWEI Ascend D2's 'swift sharing' makes it easier than ever to share. With a Wi-Fi connection, uploading pictures, videos and other files is two- to three-times faster with the Ascend D2 than other smartphones in the market. Its 'super hands-free' function transforms the Ascend D2 into a conversation sharing portal to receive sounds within a radius of 1.5m. The Ascend D2 also supports Dolby® surrounding sound and stereo recording.